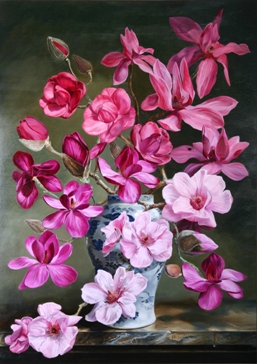 “No group of trees and shrubs is more favourably known or more highly appreciated in gardens than magnolias and no group produces larger or more abundant blossoms” stated the great Chinese plant explorer, Ernest Wilson soon after the turn of the 19th Century.

The purpose of this article and its associated pictures is to try to persuade readers of the validity of this statement and to quash some of the myths about magnolias being difficult to grow.

1. Historical Background
Magnolia was named by the Swedish botanist Carl Linneaus in 1737 in honour of the French botanist Pierre Magnol (1638-1715).   The plant which Magnol had described is that we now know as Magnolia virginiana an evergreen American species which despite its name was already growing in Europe by the mid eighteenth century.

The earliest western record of magnolias in cultivation is found in Aztec history at the time of Montezuma where there are illustrations of what we now know to be the very rare Magnolia dealbata.   This plant survives only in a few places in the wild and, although climate change is largely to blame, the natives cut the flowers for festivals and this prevents the plants seeding.   It was found by a Spanish explorer called Hernandez who was commissioned by Philip II of Spain and whose work was published in 1651.

Magnolias are however one of the most primitive plants in evolutionary history and fossil records show that magnolias once existed in Europe, North America and Asia over 100 million years ago.   Today they are indigenous only in Southern China and the Southern United States.   There are about 80 species of magnolia of which roughly half are tropical.   The genus magnolia is the largest within the Magnoliacae but there are also 9 other linked genera which include Liriodendron (1 species only), Michelia (45 species) and Manglietia (25 species).
After the latest reclassification of Magnoliacae, Michelias and Manglietias are now all renamed as magnolias.   Astonishingly one of the closest genetic relations to the magnolia is the buttercup.

Some of the earliest references to magnolias in literature refer to their purported medicinal properties.   Anyone who has smelt the peculiar smell of magnolia sap – and what an alluring smell it is – will see how likely this was to appeal to those involved in medicine.    The flower buds of Magnolia salicifolia are used in Asia to treat headaches and allergies.  A 1985 study reports on the potential use of this drug in the treatment of cancer.   Another recent study found that tonics from the bark of Magnolia officinalis lessen tremor in patients with Parkinsons disease.   Who knows what may yet be discovered.

Magnolias are pollinated in the wild by primitive wingless beetles.   Beetle pollinated flowers are characterised by their large size, white or pink colour, lack of nectar and abundance of pollen.   Beetles feed on pollen and most magnolias do not have nectar although they do have scent.   Beetles existed many millions of years before winged insects and hence their primeval appearance.   In our climate most spring flowering magnolias flower long before many insects have appeared in early summer and hence why many species seldom, if ever, set seed.   In parts of China this leads to an interesting spectacle where stands of Magnolia campbellii are predominantly white.   In Europe where beetles do not exist and wind or insect pollination is a reality Magnolia campbellii is predominantly pink.  In the wild Wilson and Forrest record the natives burning the white flowered trees as firewood.   In the West we treasure the white campbellii as being unique.   This may have as much to do with genetics as beetles but it does show what primitive and unique plants magnolias are.