Caerhays Castle is an English Heritage Grade 1 Listed Building and currently home to the Williams family. The Castle is opened for a short spell in the Spring.

Firstly it is a home. The contents show the ceaseless accumulations of its residents over the past 140 years. The geography of the house makes it impossible to give unlimited tours to large numbers of people at any one time so the size of each party is restricted to 12/15 people.

There are collections on display and the displays alter year by year but include Victorian Jugs, the crockery used for running the House (19th Century Houses were very labour intensive), the Bric-a-Brac of an Edwardian Billiard Room and much more.

Any house, large or small, depends upon the constant vigilance of its owner and you will see the results of the unremitting hard work of the staff in keeping everything clean, keeping wind and water out of the House and keeping at bay the ever present danger of destructive rot and termites. Over the years the House has been blessed by a long line of selfless and hard working people. It is hoped that their hard work will give pleasure to visitors as they wander around.

Details of the House tour have not been reproduced so as not to spoil the enjoyment of some elements of the tour.

A 170 years ago a visitor to Caerhays would have found a ruined mock Castle surrounded by a Deer Park. Caerhays has been lived in by two families since 1370.

From 1370 – 1840 Caerhays had been owned by the Trevanion family. The castle itself was built by the famous regency architect, John Nash. Work started in 1807 and was completed by 1810. There would have been little in the way of a garden in their time but the main feature of Caerhays then would have been its deer parks. These would have been useful as a source of food in the autumn/winter and would also have added to the beauty of the place during the rest of the year. The trouble with deer parks was that the deer had to be kept in an enclosed area by very substantial and expensive walls. The remnants of these can still be seen in some of the woods here today.

You may not have a very high regard for John Bettesworth Trevanion or for the extravagance of the home he built. However, he was only 21 years old when he came to Caerhays in 1801. It is as well to recall one of the few opinions we have of his contemporaries who described him as a ‘complete man of fashion in the best sense of the word and without anything frivolous or effeminate’. The quotation comes from the history of the House of Commons 1790-1820. 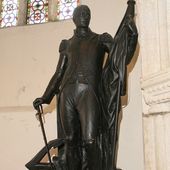 Bettesworth Statue in the Church 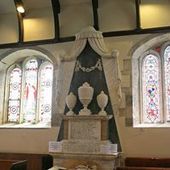 Trevanion Memorial in the Church 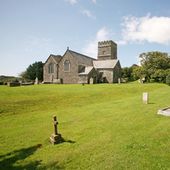 If you visit Caerhays Parish Church you will find two monuments. One is a statue of a seaman in black – he was a naval officer who served under Nelson at Trafalgar and died in a shipwreck of Norway – he was John Bettesworth’s brother. The deep hold and affection for Caerhays of the Trevanion family can be glimpsed in the plaque near the old harmonium which was put up a few years after the last Trevanion retreated rather hastily to Paris and the Bailiffs took over the estate in 1840.

At last Michael Williams of Scorrier and Burncoose purchased the by now very derelict property. The house had not been watertight for decades so very extensive repairs had to be carried out and it is open to some doubt as to whether Michael Williams who died in 1858, ever in fact lived in the Castle. Both he and his son John Michael, who succeeded him, spent very peripatetic lives since, as they were both active in mining, smelting and the banking sides of National and County life, frequent visits had to be made to Swansea and London. J.M. Williams died in 1880 and his eldest son and successor J.C Williams (born at Pengreep in 1861) took over the estate. For a few years John Michael’s widow lived at Caerhays until her death in 1884 which, in turn, was the same year that J.C. Williams married his cousin Mary Christian. It would appear therefore that it was not until 1892 that Caerhays became a proper home for the Williams family. 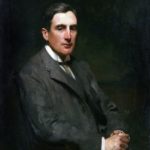 He was only 18 years old when he inherited Caerhays and was in fact still at Cambridge University when his father died. He gave up politics in 1895 and became passionate about gardening. He was quick to recognise the importance of the plant hunters’ work and contributed £400,000 (in today’s terms) of his own money towards Forrest’s 1911 and subsequent expeditions, as well as being involved in the joint funding of many other trips.

He started a garden diary in 1897 and continued it right up to his death. The diary has been transcribed online today and whilst there are no pictures from this time it is a real insight to the garden during his time. 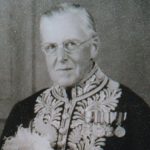 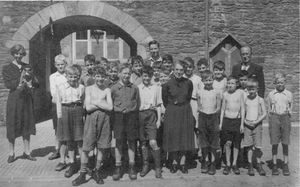 The new owner was Charles Williams, M.P., a keen gardener with a very good eye for blending colours together when erecting stands at shows. He found that he faced huge problems – Death Duties were a cause for great worry. The war came and upset everything even more. A school from the East End of London took over the Castle so that Charles Williams and his wife Mary had to camp in it. Invasion scares, food scarcity and petrol rationing did not make things easy but it was the garden that faced the biggest threat. The young gardeners left to fight. Those who remained were in their late 50’s or early 60’s and did not have the benefit of todays chainsaws or allan scythes. The garden was a large one and the weeds and brambles had been very robust indeed.

It fell to Charles Williams when the House of Commons was in recess, to work vigorously at the weekends with his old fashioned hand scythe to cut and cut again the army of potential destroyers.

It may seem to be an exaggerated description but weeds can take control very quickly. So he saved the garden. After the war some of the young staff came back. Planting was resumed on a small scale. The Chinese plants put out in the 1920’s and 1930’s were beginning to reach maturity and the great excitement was being endangered by the display of deciduous tree magnolias. Every year the trees grew bigger and the displays more impressive. In 2005 they still do. 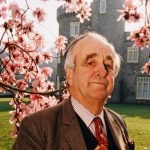 Francis Julian Williams was unexpectedly left the estate in 1955, and his career path was a familiar one at the time for those who were not likely to inherit a large landed estate, he had little interest in shooting, plants, land
management or following his father’s interest in the sea. He married Delia Marshall in 1956, eldest daughter of Campbell and Virginia Marshall from St Mawes. FJ approached his new duties as custodian of the Caerhays Estate with humility and trepidation.

Family life was quickly established as my mother struggled to renovate Caerhays from the wartime evacuees. Having ignored gardening completely for the first 30 years of his life FJ became an ardent self taught and knowledgeable gardener. Books rather than a spade were the key and FJ’s photographic memory for maths and figures was diverted to learning about Chinese rhododendrons.

FJ also contributed to the Garden Diary from 1955 until 2007 when his health deteriorated. 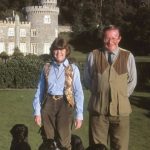 Whilst it was officially passed to him in 2019, Charles Henry Williams has been continuing the transformation of the Castle, The Estate and gardens for many years since his father’s illness. Charles trained as a merchant banker before returning to Cornwall to run Caerhays Castle Gardens and Burncoose Nurseries.

He and his wife Lizzie have worked tirelessly to build the Castle and Estate as a world renowned spring garden, and have been key the restoration of the mineral collection, the renovation of estate buildings into luxury holiday accommodation, and one of the best shooting venues in the UK.

He contributes daily to the Garden Diary.