Caerhays is justifiably and internationally famous for its gardens, largely created by John Charles (J C) Williams. What until recently has been little in evidence is the selection of fine minerals assembled by generations of the Williams family at Burncoose and Scorrier House and now on display as part of the house tour.

John Williams (1753-1841) lived at Burncoose in his early life and moved to Scorrier House, which he built, in 1778. Archival correspondence shows that he was purchasing minerals for the family collection as early as the late 1700s. He also acquired a vast number of the finest copper minerals from mines in the parish of Gwennap which he managed. Along with his sons, John and Michael, they were founder members of the Royal Geological Society of Cornwall in 1814, testament to their interest not only in mining but also in mineralogy and geology.

The Scorrier House mineral collection has been described by authors/travellers in the early 19th century as ranking alongside that of Philip Rashleigh of Menabilly and being one of the most important collections of Cornish minerals ever assembled. Unfortunately, almost all of the early Cornish specimens lacked any form of labelling. Consequently, the present-day process of cataloguing has been a painstaking one.

Perhaps the most committed to the growth of the collection was the son John Williams (1778-1849). He had a passionate interest in minerals. On his death his younger brother, Michael Williams inherited the estate and in 1854 Michael purchased the Caerhays Estate and the minerals from Scorrier House were moved to Caerhays Castle a decade later, where a display in the museum generated considerable public interest.

A momentous decision by J C Williams was made in 1893 to dispose of most of the mineral collection, retaining a small selection for the family at Caerhays. He invited the British Museum (Natural History), the Royal Institution of Cornwall, and the Robert Hunt Memorial Museum, Redruth, to select what minerals they desired. Two years previously, the Camborne School of Mines was afforded a similar opportunity.

For well over 100 years since the dispersal of the minerals to the learned institutions, the remainder have lain secreted throughout the Castle in every nook and cranny conceivable. The decision in 2008 to catalogue and reinstate a display of the family minerals has culminated in the present-day cabinet in the Billiard Room, with an additional selection of large specimens in wall cabinets in the Museum. 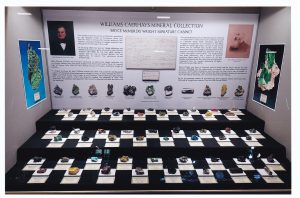 Read – latest research by Halle University on the gold, Nov 2019 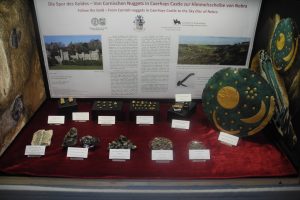 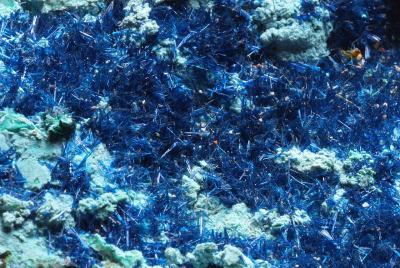 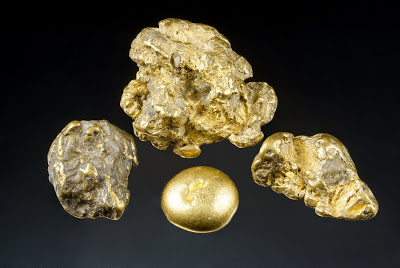 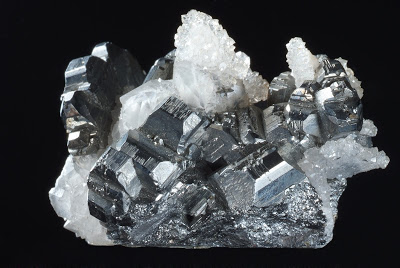 Visitors availing themselves of the house tour have the opportunity of seeing a representative selection of worldwide minerals, the Cornish secondary arsenates and phosphates ranking alongside the finest known, even to this day. The depth in numbers and quality of these specimens has remained unequalled for two centuries.

A superb suite of the beautiful blue copper carbonate mineral Azurite, from Chessy-les-Mines, France, is represented by over 30 examples.

By the mid 1800s specimens were added to the collection through purchase from British and European mineral dealers, many bearing labels. At the same time the Williams family mining interests had extended to the Americas providing yet another source of fine minerals for the Caerhay’s Collection.

A separate collection of minerals in the form of thumbnail size specimens was rediscovered early on in the project. The individual specimens bore pink paper labels with printed numbers but no other information. A catalogue of sorts was believed to have existed and this came to light in 2011. The evidence confirms that the thumbnail collection was provided by Bryce McMurdo Wright, one of Britain’s foremost mineral dealers, probably as a commissioned order in the late 1850s or early 1860s. For reference and research purposes this collection is invaluable.

The prestige and historical importance of the mineral collection has been recognised through invitations to display at the two most important mineral shows in the world, Tucson, Arizona, and Munich, Germany, in February and October 2011 respectively. 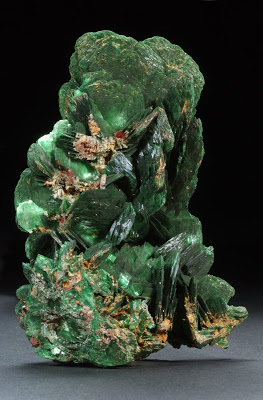 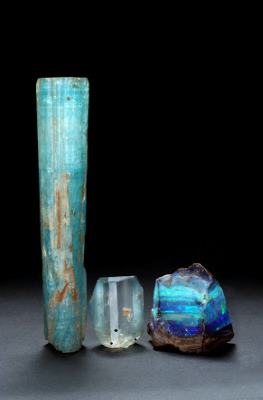 Aquamarine & Topaz from E. Siberia and Opal from Queensland