The world renowned mineral collection, assembled by the Williams family of Burncoose House and Scorrier House in the late 18th century and early 19th century, was based largely on the superb suite of copper minerals from the parish of Gwennap in Cornwall.

In the early 1860s the Scorrier House collection was moved to Caerhays Castle, another Williams residence, and occupied by John Michael Williams (1813-1880).

By this time metal mining in copper and tin was in serious decline, and with the closure of many local mines, the opportunity to acquire fine specimens shrank dramatically.

Already steeped in the mining and mineral tradition of Cornwall, John Michael Williams nevertheless continued to add to the family collection, by casting the net much further afield. He purchased worldwide cabinet-size specimens mainly from Emile Bertrand of Paris, Dr Leopold Eger of Vienna, Felix Pisani of Paris, Samuel Henson of London, and Bryce Wright of London.

A unique purchase by John Williams around 1871-1874 was a one-off commissioned cabinet of miniature-sized specimens arranged in order of their metallic element. In 2008, Courtenay Smale, the Curator of the Caerhays Castle Collection, discovered a fine mahogany cabinet, manufactured by Howard & Sons of London, which had originally housed the collection of some 1340 specimens. Fortunately, each specimen bore a small numbered pink label but unfortunately there was no catalogue. 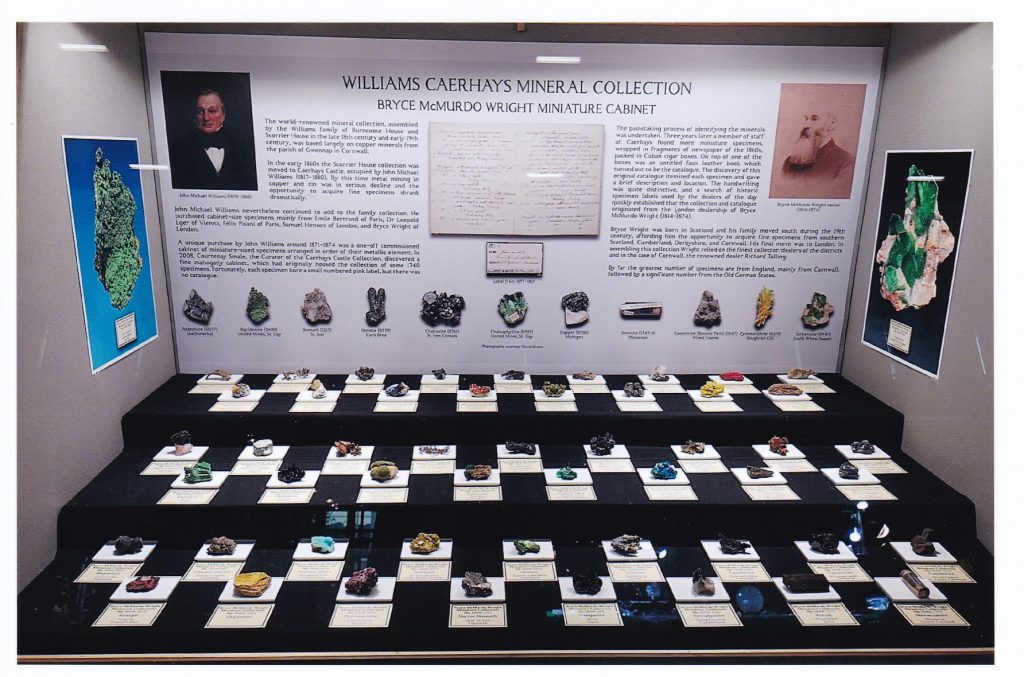 The painstaking process of identifying the minerals was undertaken. Three years later a member of staff at Caerhays found more miniature specimens in the private quarters of the castle wrapped in fragments of newspaper of the 1860s and packed in Cuban cigar boxes. On top of one of the boxes was an untitled faux leather book which turned out to be the catalogue. Although the collection had been catalogued by way of the species, the discovery of the original catalogue itemized each specimen and gave a brief description and location. The handwriting in the catalogue was quite distinctive, and a search of historic specimen labels used by the dealers of the day quickly established that the collection and catalogue originated from the London dealership of Bryce McMurdo Wright (1814-1874).

Bryce Wright was Scottish born and his family moved south during the 19th century, affording him the opportunity to acquire fine specimens from southern Scotland, Cumberland, Derbyshire, and Cornwall. His final move was to London. In assembling this collection Wright relied on the finest collector/dealers of the districts and in the case of Cornwall, the renowned dealer Richard Talling. Some of the specimens in the collection bear Talling’s handwritten numbers.

A geographical analysis of the source of the miniatures indicates that by far the greatest number of specimens are from England, mainly from Cornwall, followed by a significant number from the Old German States. By contrast, just two specimens are from Australia, and only one from the whole continent of Africa.

We were reviewed in the Mineralogical Review Vol 51. March – June 2020