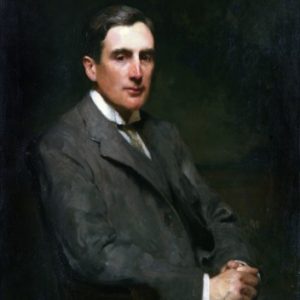 John Charles Williams was only 18 years old when he inherited Caerhays, and became became passionate about gardening. He was quick to recognise the importance of the plant hunters’ work and contributed £400,000 (in today’s terms) of his own money towards Forrest’s 1911 and subsequent expeditions, as well as being involved in the joint funding of many other trips.

In return, Caerhays received a wealth of seed from newly discovered species of Chinese rhododendrons, magnolias, camellias, azaleas, acers and evergreen oaks to mention but a few. A large number of these unique plants can be seen growing in maturity at Caerhays today.

J.C. Williams and his cousin and friend, P.D. Williams of Lanarth, became members of the Royal Horticultural Society in about 1892/93. J.C. Williams had become attracted to the gardening ideas of William Robinson and was beginning to harbour ambitions for making a wild garden at Caerhays but, in 1897, he was diverted by a new interest; namely that of daffodil breeding. If J.C. Williams became interested in something he was not one to take half measures. His friendship with the Reverend George Engleheart began in 1897 and was very opportune as Engleheart had started to show off his work as a pioneer on daffodil hybridising. JCW was a heavy purchaser of these new varieties and they formed the chief basis for his future hybridisations. The other basic varieties he used for plant breeding were Lulworth, Monarch and Weardale Perfection, coloured representations of which had featured in William Robinson’s magazine, ‘The Garden’.

J.C. Williams only named one daffodil variety himself, the rest were named by other people and they can be found in the New International Daffodil Register. Read more about daffodil breeding at Caerhays.

J.C. Williams was a very private person and prized his privacy. It is almost certain that he was not very pleased when William Robinson visited Caerhays in 1899 whilst J.C. Williams was away and described developments being made with Rhododendrons, Bamboos, Tree Ferns etc. The article was signed with a large ‘V’ which possibly showed that he thought getting into Caerhays was a triumph.

The next stage was the arrival in Veitch’s Nursery of the first new rhododendrons from China which had been collected by E.H. Wilson. It is then that the subsequent debate that must have occurred as to where these new varieties, which held great potential for British gardens, were to be tested. Caerhays was chosen. Many of the original Wilson species and plants from this time can be seen in the garden. The biggest cluster is in the Big Quarry which visitors will see when they come down the hill when leaving the garden (that is if they follow the suggested blue route around this garden!).

Mr Wilson continued to explore China but changed his employers leaving Veitch’s Nurseries and going to work for the Arnold Arboretum which is outside Boston, Massachusetts. At that time, the Arboretum was under the management of the greatest expert of the new Asiatic plants, Professor Charles Sprague Sargent.

Wilson remained in close contact with J.C. Williams and must have told the Professor about Caerhays and the way Chinese plants were being tested.

So it was in 1911 that plants arrived from the Arboretum some of which visitors may come across in their garden wanderings today.

Plans must have been put in hand for Professor Sargent to visit Caerhays which he did. Alas his choice of dates were very unfortunate. He came to Caerhays at the end of July 1914 and the first World War broke out on August 4th. 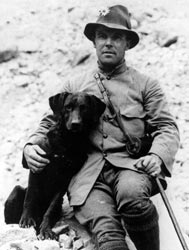 J.C. Williams thought that a BRITISH Plant Hunter should be employed to explore other areas of China and that British gardens should be the prime beneficiary. After consulting with Kew Royal Botanic Garden and Edinburgh Botanic Garden such a man was discovered and he was the great George Forrest. He had been working for A.K Bulley who ran Bees Nursery in Cheshire but he wished to have a wider remit for plant collection.

His first expedition after this change over took place between 1912 – 1914.

JCW was not completely mesmerised by Rhododendrons and asked for Forrest to look for new Rubi-a group of plants that was engendering some excitement at the time. To emphasise the variety of Forrest’s remit it is interesting to note that the first Forrest introduction to receive acclaim from a wide audience was Primula helodoxa.

On page 166 of the journal of the RHS Primula Conference held in April 1913 “P. helodoxa”, wrote Professor Bailey Balfour, “is the latest of Forrest’s species. It was collected in 1912 for J.C. Williams and should be in our gardens this year. It is a magnificent plant of strong growth producing many whorls of large dark yellow flowers”.

The description of the proceedings of this conference is truly amazing.

(1) for the great number of Primulas listed

JCW’s first two years with Forrest had been happy and successful (view some of Forrest’s original introductions) but the coming of the war, and the high taxation which accompanied it, meant the cost of future expeditions had to be shared out by syndicates of gardeners. Caerhays was still to play it’s part in helping to raise new introductions in the years ahead, chiefly rhododendrons in the period 1917-1922 and other plants in the expeditions of 1924-26. The chief legacy of this last period which will startle the fortunate visitor was the Michelia doltsopa plants.

J.C. Williams’s plant interests kept on widening – in 1919 and the years that followed Oaks (Quercus) started to arrive.

The 1920’s saw JCW take an interest in Camellias and Fuchsias. It was at this stage that the first cross between Camellia japonica and Camellia saluensis was made. The resultant hybrids took the name x williamsii and, in the next 75 years, literally thousands of different named x williamsii hybrids have been bred all around the world. The two old original plants still just survive today against the castle wall. It was the hybrid vigour resulting from this cross that turned the camellia from being a tender rich man’s conservatory plant into the hardy, floriferous garden plant which has such universal appeal today.

JC started a garden diary in 1897 and continued it right up to his death. The diary has been transcribed online today and whilst there are no pictures from this time it is a real insight to the garden during his time, the diary, now with pictures and video continues to be updated every day by Charles Williams.