A. INTRODUCTION – THE IDEA

The idea of establishing a podocarpus collection at Caerhays stemmed from three very different sources:- 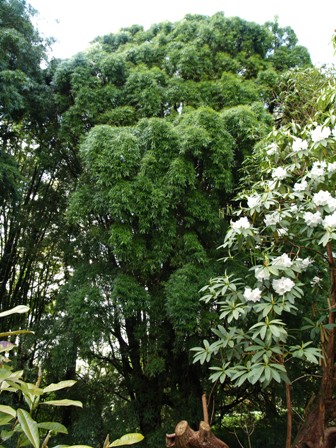 1. Dr Chris Page, formerly the conifer expert at the Royal Botanic Gardens Edinburgh, told us in 2002 that the stand of Podocarpus salignus at the top of the garden at Caerhays was larger and taller than anything still left growing in the wild in Chile as a result of the demand for quality timber in furniture making. The group of trees contains many male and female forms which result in a carpet of self sown seedlings. Some of these are now being returned to Chile to help re-establish the tree in its natural habitat.

2. From time to time County Park Nursery (Graham Hutchins) had mounted spectacular displays of New Zealand Podocarpus species and his own new hybrids at Royal Horticultural Society shows. These served to whet the appetite to grow more of these spectacular and unusual plants.

3. Also, in 2002/3, Phythophora ramorum (absurdly and quite misleadingly known as Sudden Oak Death) was found on swathes of Rhododendron ponticum at Caerhays. Defra’s response was to demand the immediate removal of all the Rh. ponticum in the garden. However Rh. ponticum has served a key purpose at Caerhays (and many other woodland gardens throughout the UK) for the last 100 years. It is, of course, the main shelter belt protecting the choice, and often unique, Asiatic plants in the garden. Although Defra have since been persuaded to spread the cull over a number of years gaps in the shelter belts have had to be plugged.

The concept of using low growing, compact, evergreen, Podocarpus as windbreaks especially for the underdraft, needed to be trialled. As far as we yet know the Podocarpus family does not get Ph.ramorum. This was perhaps the prime motivation for the start of the new collection.

These three entirely separate motivations saw the rapid expansion of the Podocarpus collection at Caerhays with plants being sourced from Holland, South Africa, New Zealand and China as well as many of Graham Hutchins new hybrids from his nursery in Essex and from Kilworth Conifers in Leicestershire.

B. A POSSIBLE NATIONAL COLLECTION

It did not take long for the idea of establishing a National Collection under the auspices of Plant Heritage (formerly the NCCPG) to take hold. However, there was a need to wait several years, until many of the younger plants in the collection were more visible and established for visitors to see.

Now, in 2009, the first steps towards obtaining formal approval are being taken. There is already one National collection in Hampshire with 72 varieties according to the Plant Heritage yearbook for 2009. However, the point of National Collections, is to preserve and retain plant collections on different sites with different soil conditions and climatic conditions to ensure their survival for the future both for the public to see and compare but, more importantly, for the genetic material to be stored for future breeding work or reintroduction programmes into the wild where species are becoming endangered.

There are around 100 species of evergreen Podocarpus trees and shrubs which come from the warm-temperate and sub-tropical rain forests of the southern hemisphere. Clearly the sub-tropical species are only for the heated greenhouse but, those species from the Himalayas and Japan, have long been features in British gardens as a result of the work of the great plant hunters in China soon after the start of the 20th century.

Similarly, some Chilean species have been well established in British gardens for up to a hundred or more years. However the New Zealand and Australian species are, in the main, relative newcomers to UK gardens and are too tender for gardens outside the South West.

The name Podocarpus refers to the seeds which are on swollen foot stalks. ‘Podo’ means foot and ‘Carpus’ means seed.

Apart from the “true” Podocarpus species there are also a number of related species of Podocarpaceae which are called Dacrydium, Dacrycarpus, Prumnopitys, Nageia, Lagostrobus, Lepidothamnus, Halocarpus, Phyllocladus and Saxagothaea. These too form part of the collection at Caerhays.

D. THE ORIGINAL PLANTS AT CAERHAYS

P.nubigenus – There are two mature plants of P. nubigenus growing at the bottom of the Auklandii Garden. These small trees, which were planted in the 1920’s, are about 25 – 30 feet tall. P.nubigenus is a native of Chile with long broad rich green leaves and is grown best only in areas of high rainfall. The male flowers are on spikes and the large seeds are covered in a fleshy receptacle. It would seem that both the Caerhays plants are male as no seeds have yet been found. 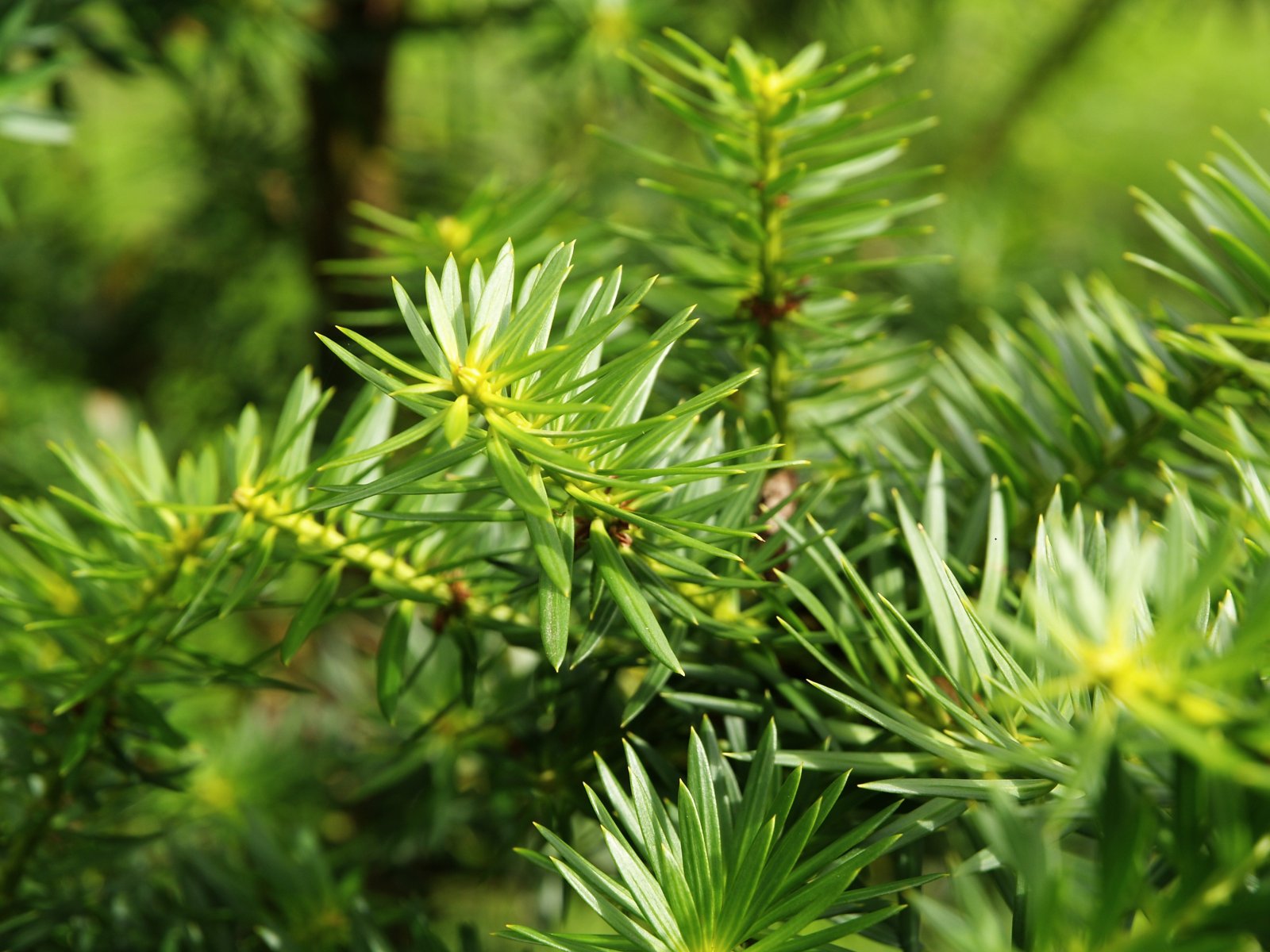 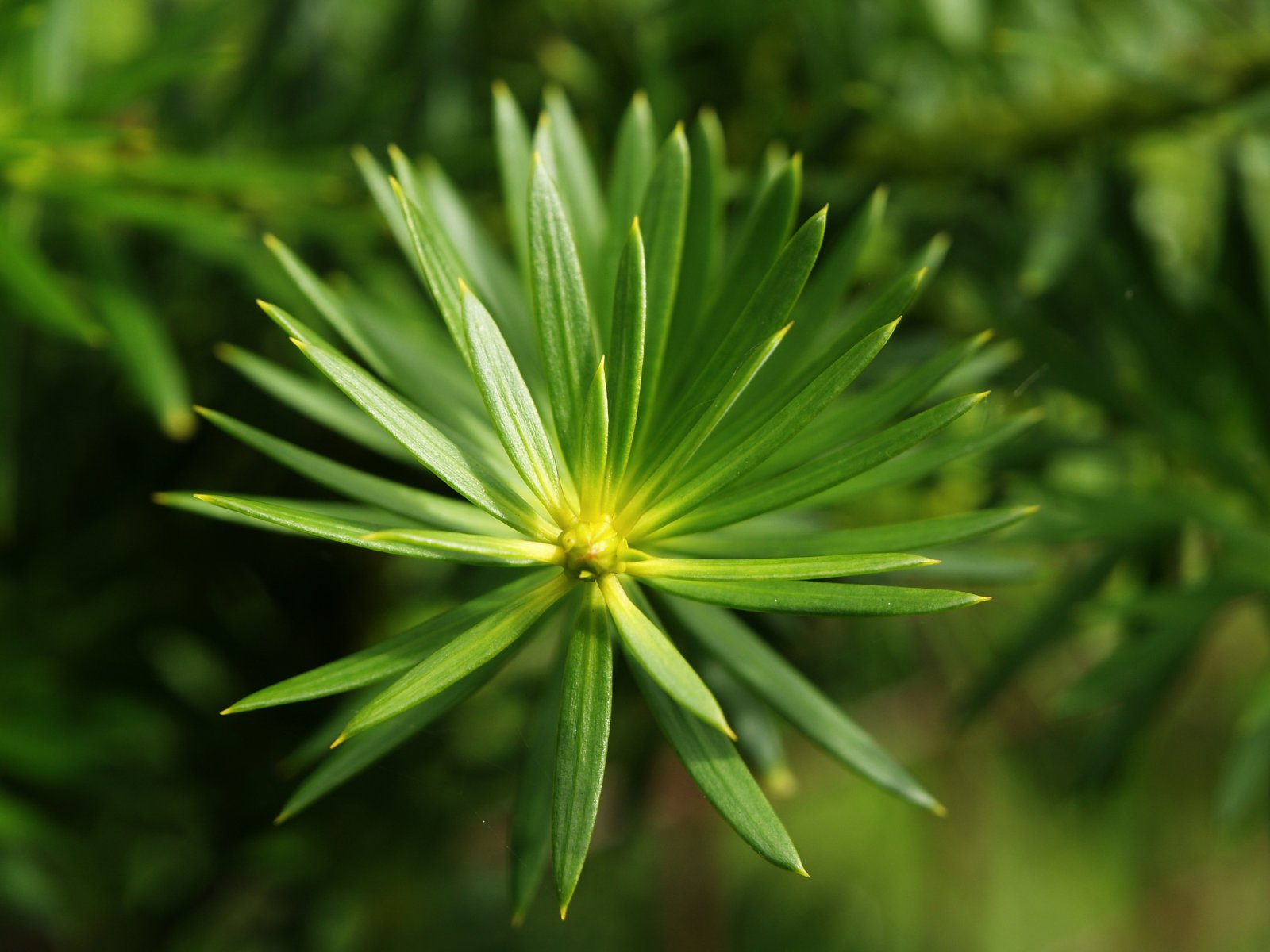 P.totara – ‘The Totara’ – This plant also grows in the Auklandii garden in close proximity to the 2 P.nubigenus. Its growth and habit is therefore somewhat stunted and there has been some controversy about its identification especially as Hilliers and the RHS dictionary are somewhat contradictory. Its appearance might suggest that it is P. nagi but, since this is a Chinese and Japanese species, and located, as it is, next to a Chilean species this seems unlikely.

P.totara is a New Zealand native and has stiff, lineer, leathery leaves with a sharp point. Its timber is extremely valuable being straight grained, reddish, and as durable as yew. In the UK it seldom grows to anything like its height in the wild which can be up to 100 feet. 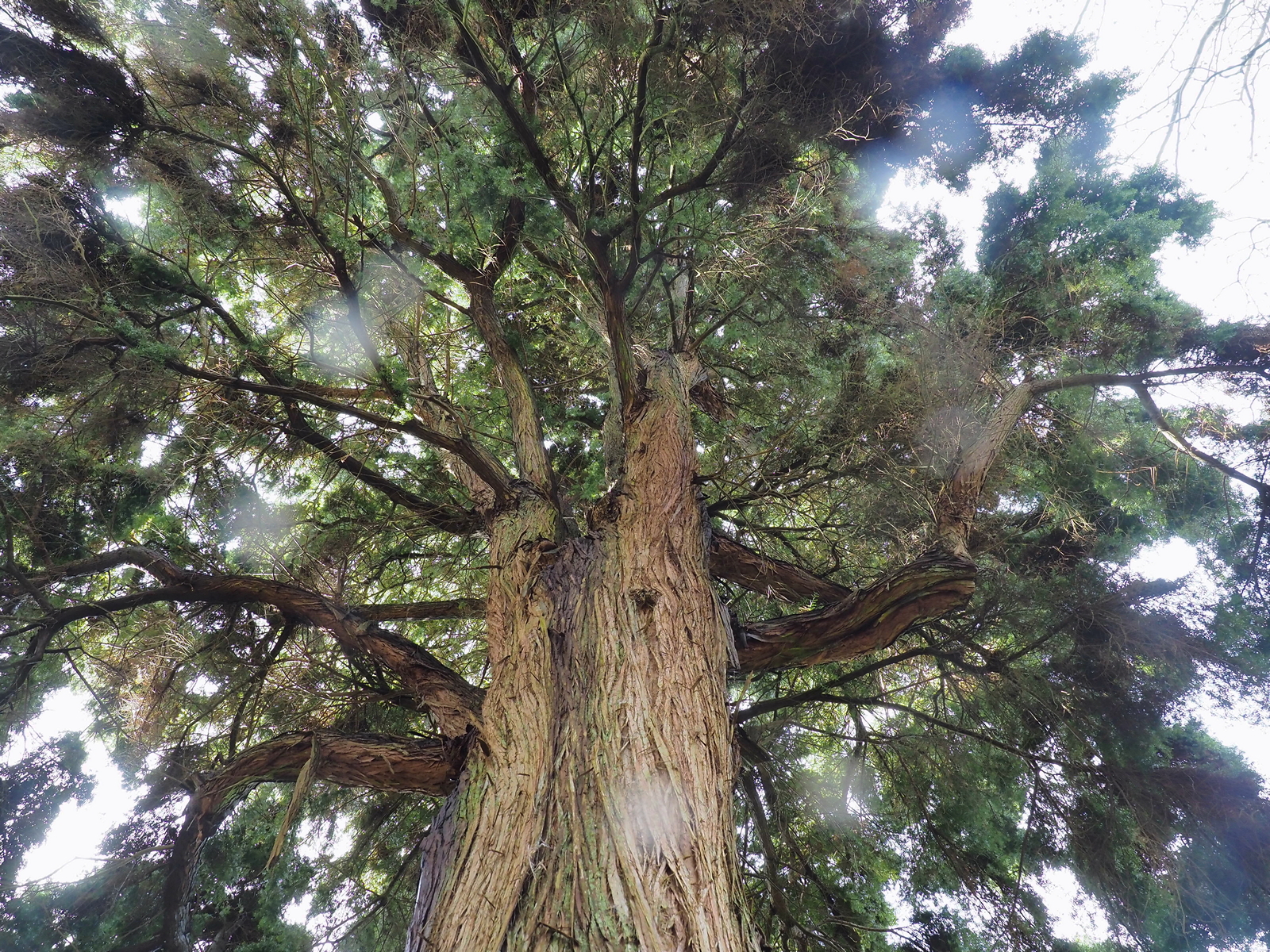 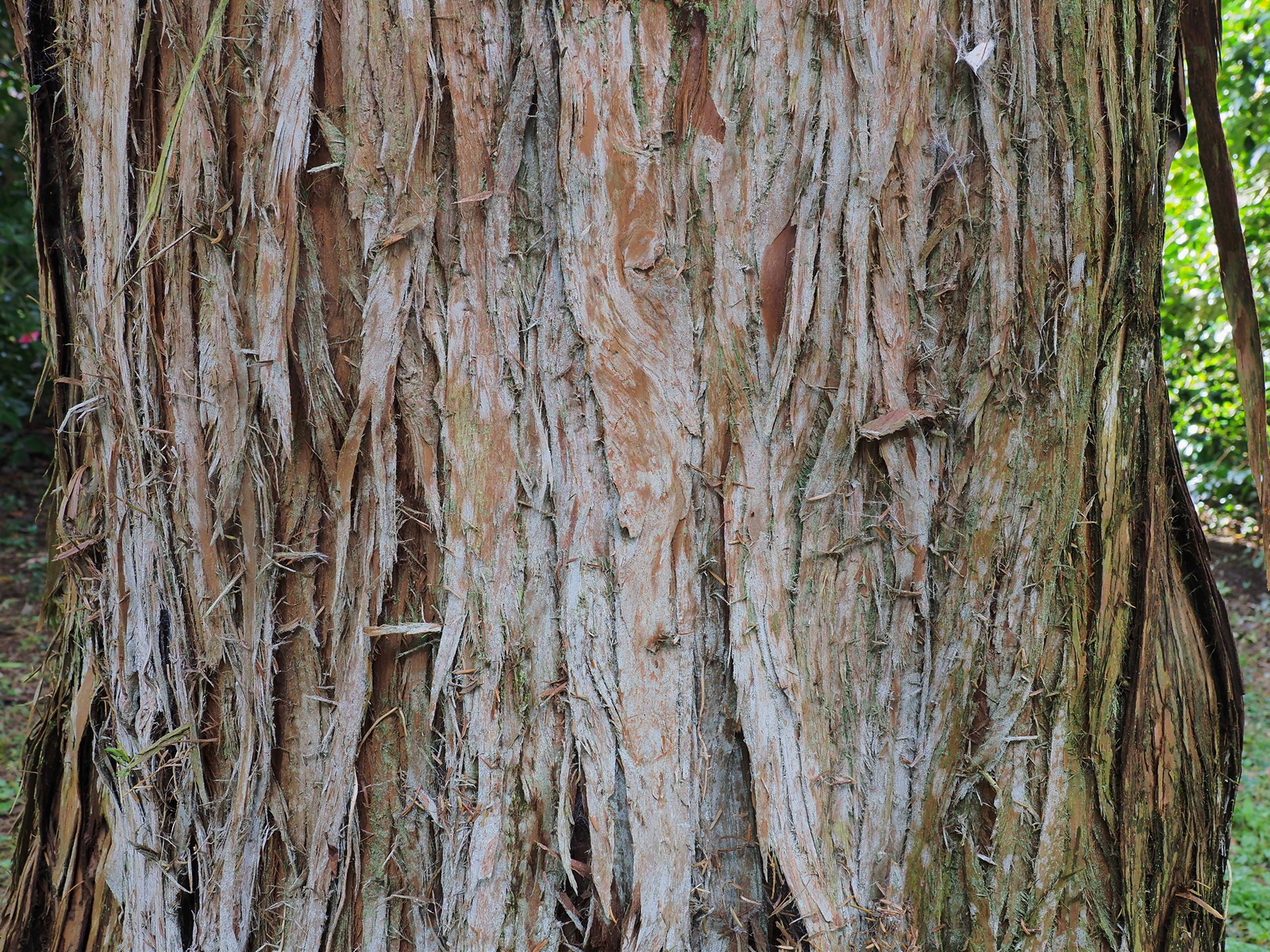 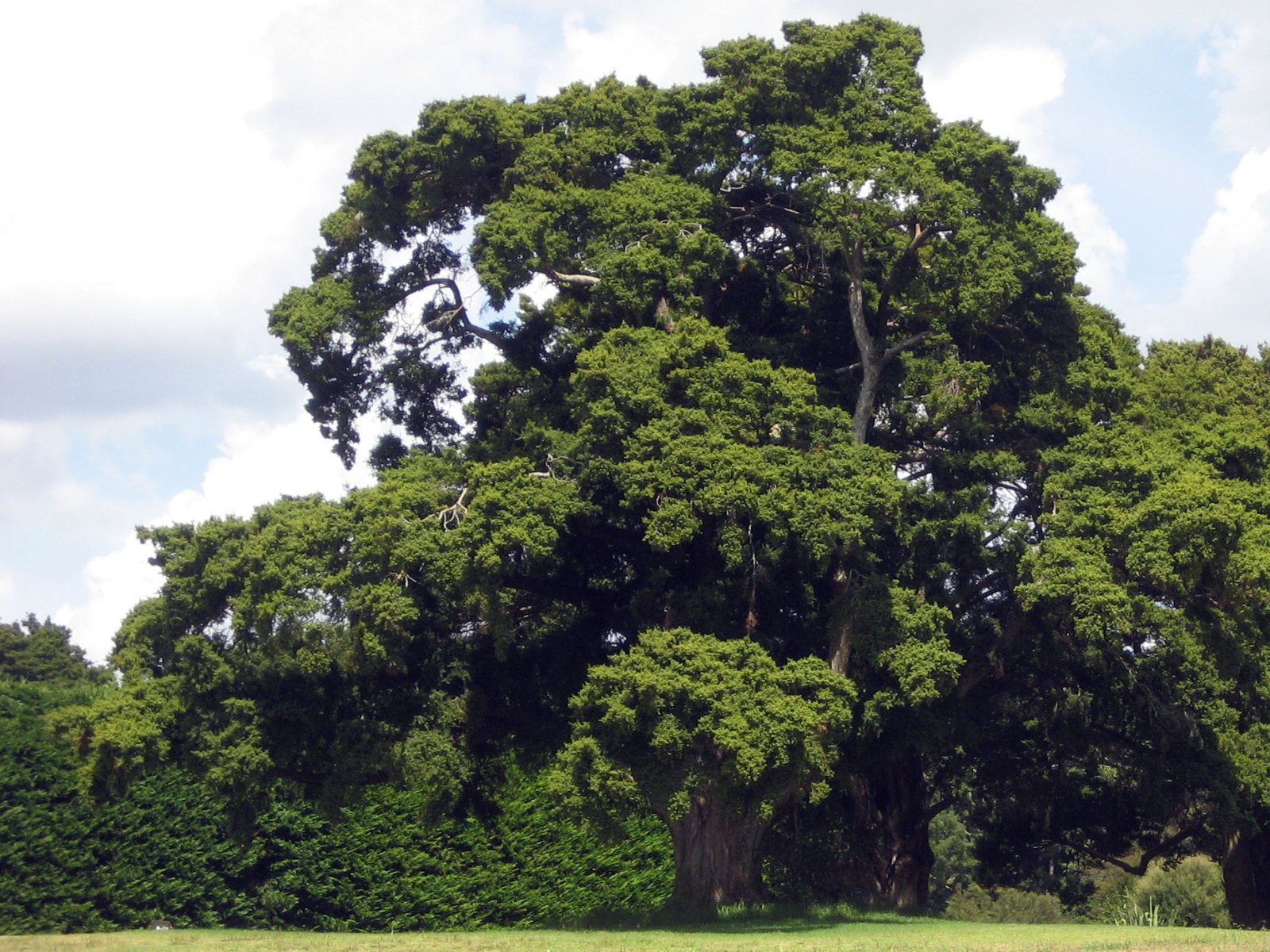 P.salignus – This is a most attractive and elegant Chilean species with a tropical appearance whose timber is much sought after by wood turners and choice furniture makers. Hence it’s growing scarcity in the wild. When cut the branches stay fresh and green for up to a week without water. In water they will last well over a month or even longer. As such its foliage is much favoured by flower arrangers and those who need to conceal pots from the judges at the Chelsea Flower Show.

P.salignus is frost tolerant down to about – 10oC but, when given protection from cold winds, it will survive most cold winters in the West Country. In mild locations it makes a good hedge. Individual male and female trees need to be grown in close proximity to produce good red yew like fruits and, consequently, seedlings. It was always said that the most of the first Cornish plants were male and that most of the P.salignus grown in western Ireland were female. The specimen tree in Burncoose Gardens does however appear to be self fertile rather than dioecious although the sex of the Caerhays plants is readily identifiable when flowering and fruiting. The tree was introduced to the UK in 1847. The Caerhays plants date from the 1920’s and were recorded by Alan Mitchell as being 35 feet tall in 1966 . Owen Johnson measured the largest clump as 16 meters feet in 2007. 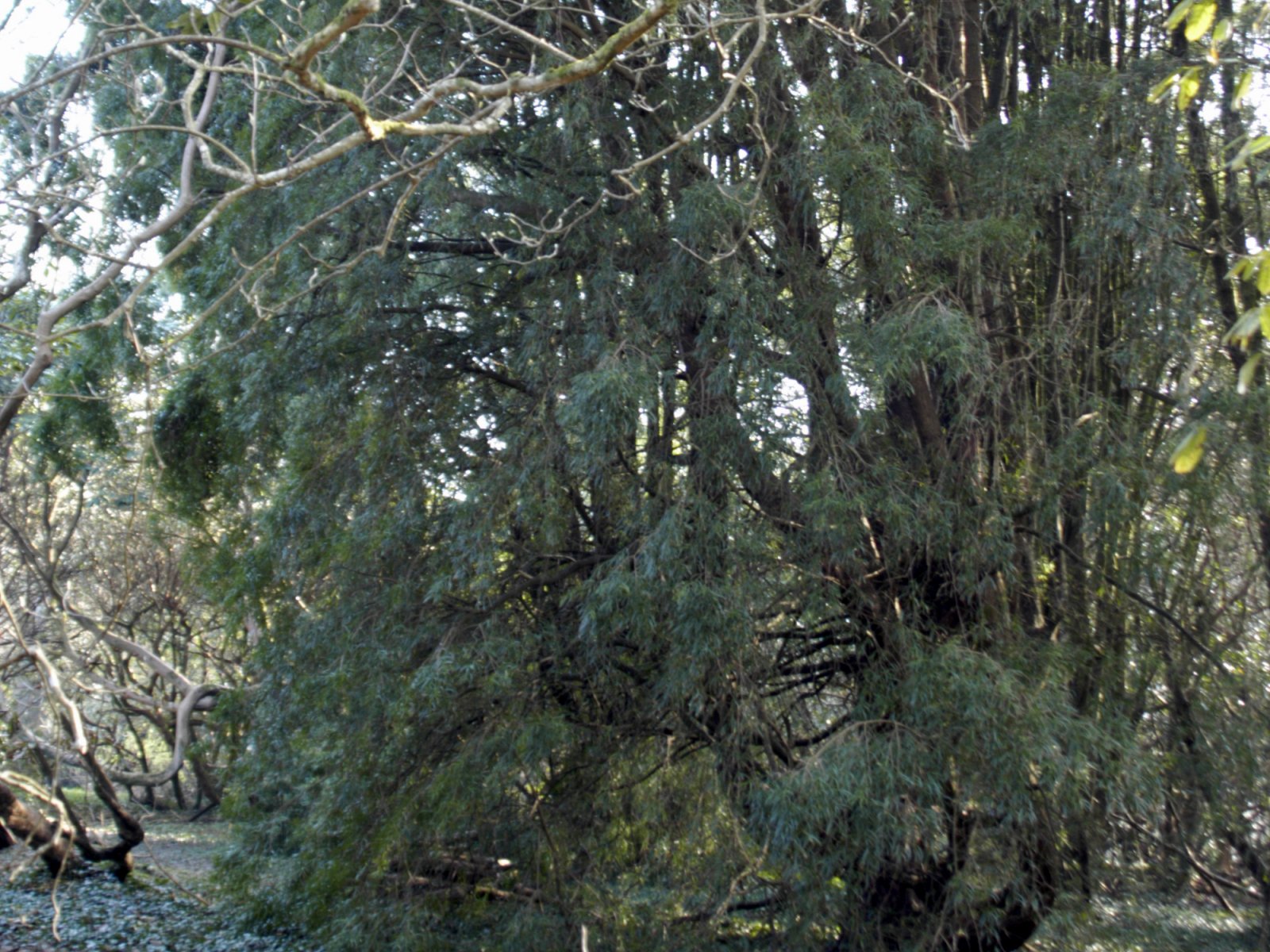 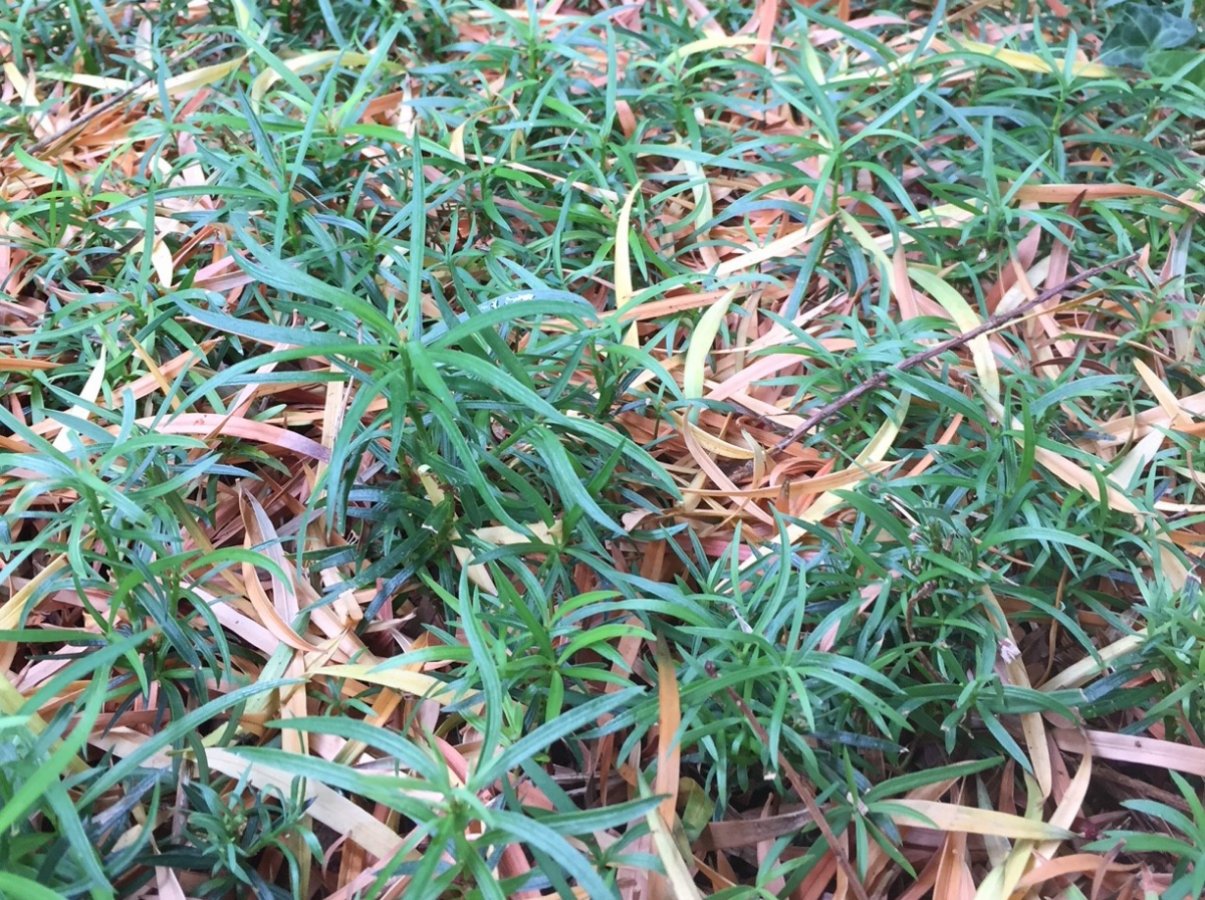 P.nubigenus ‘Pendula’– This plant was a gift from Rosemoor and grows in the Rookery. It has a much more drooping habit and rather darker leaves than the original Auklandii garden plant but this may be simply immaturity. A second Rosemoor plant grows at the top of the garden and has a very dense habit. Its provenance is unclear 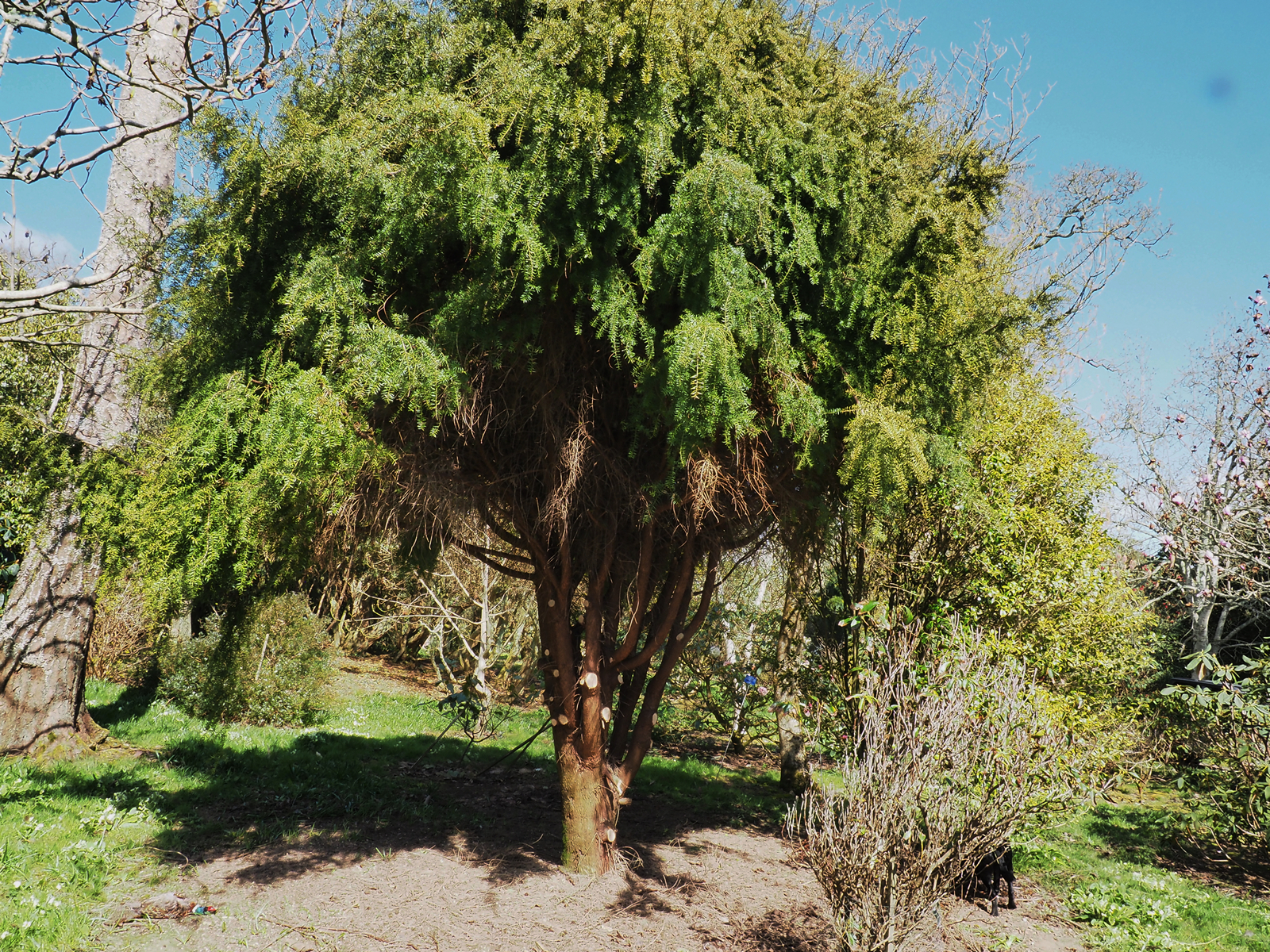 P.macrophyllus – This is a slow growing, erect, branched, shrub achieving only about 20 feet in maturity. The leaves are arranged in spirals around the shoot and the new growth is yellowish becoming dark green on the topside.

The plant is not a native of Japan or China and is known there only as a garden plant. George Forrest discovered a plant in the wild which he believed was P.macrophyllus but this was later reclassified as another species.

P.macrophyllus ‘Aureus’ – This is a similarly slow growing and has leaves which are margined and striped yellow. This plant was introduced by Veitch’s Nursery near Exeter in 1892. The Caerhays plant is only about 5 feet tall after 25 years in situ. 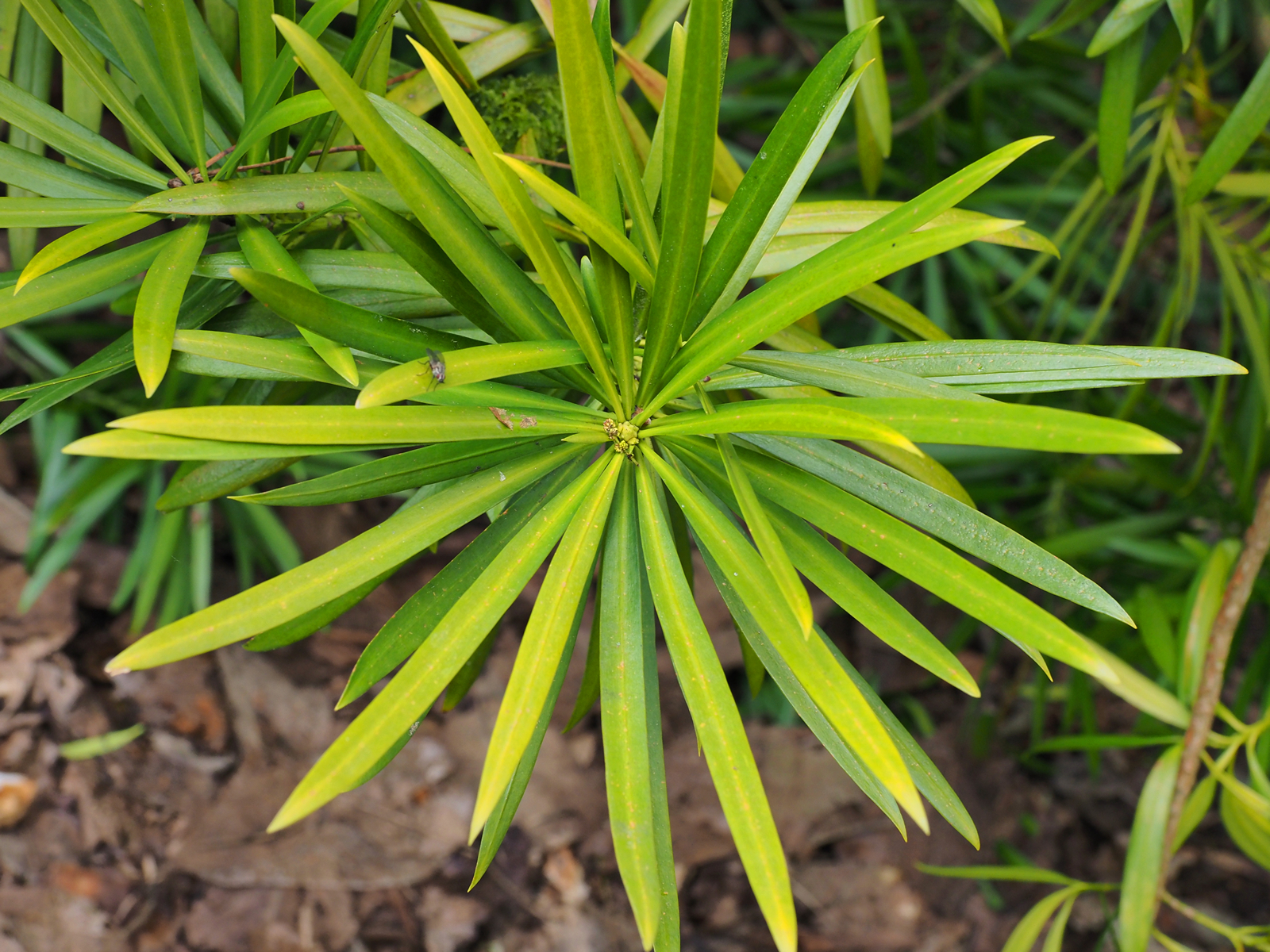 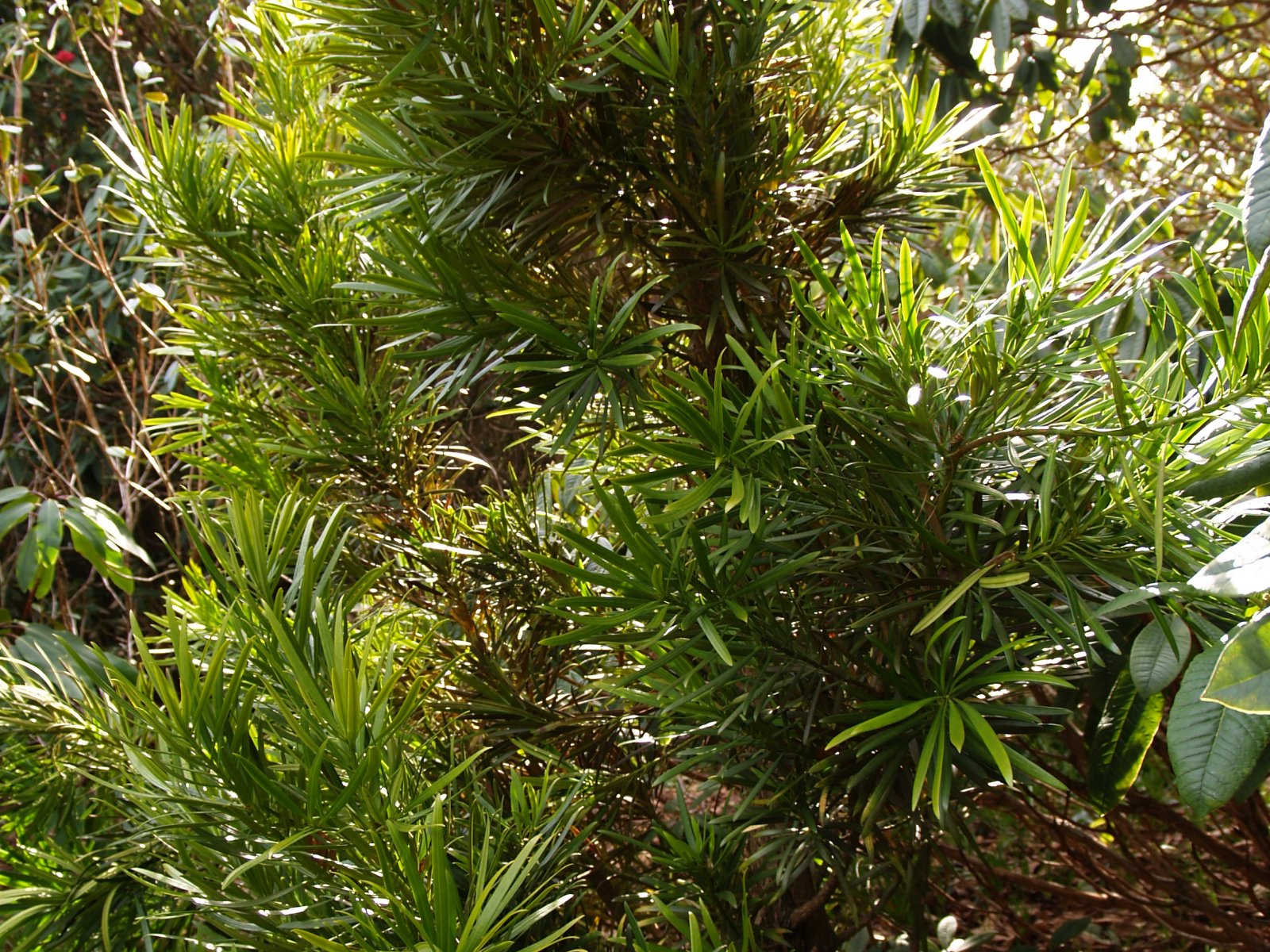 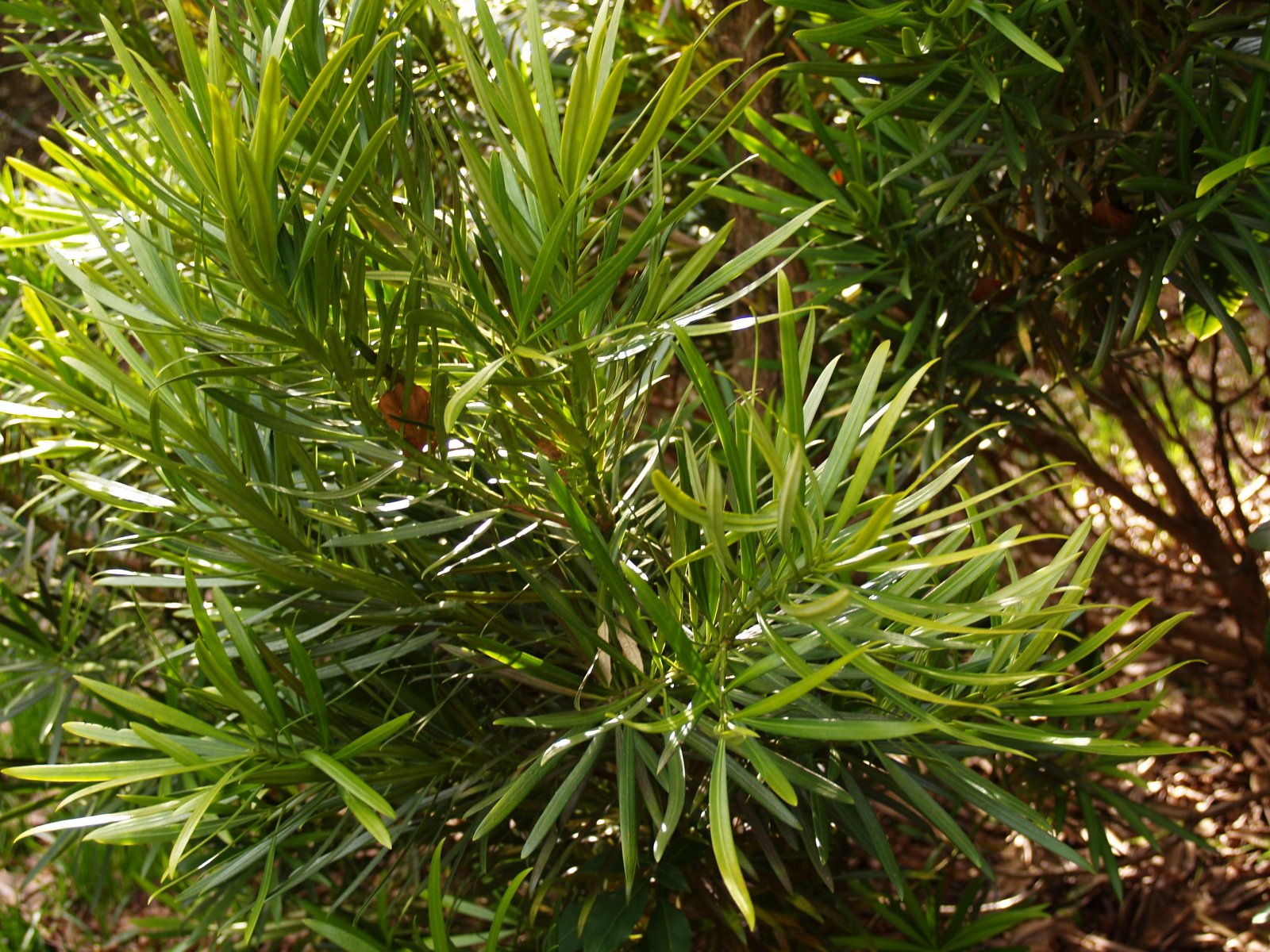 P.totara ‘Aureus’ – This is the attractive golden form of P.totara. There are several specimens at Caerhays; the largest is in the Auklandii Garden and is around 20 feet after about 25 years. The tree has a dazzling yellow appearance in sunlight and provides good colour in the drab winter months especially when planted near another dark green evergreen conifer such as yew. 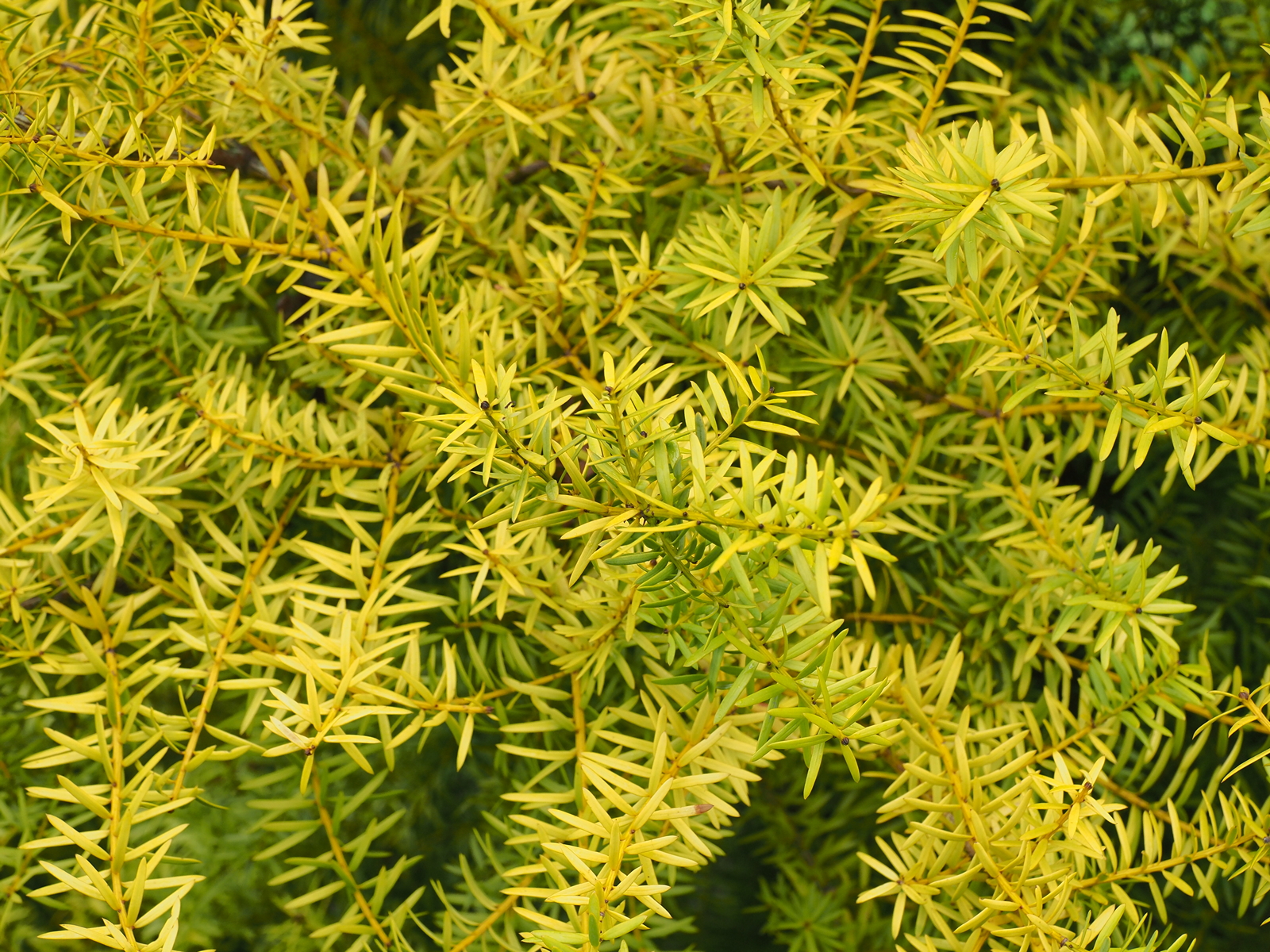 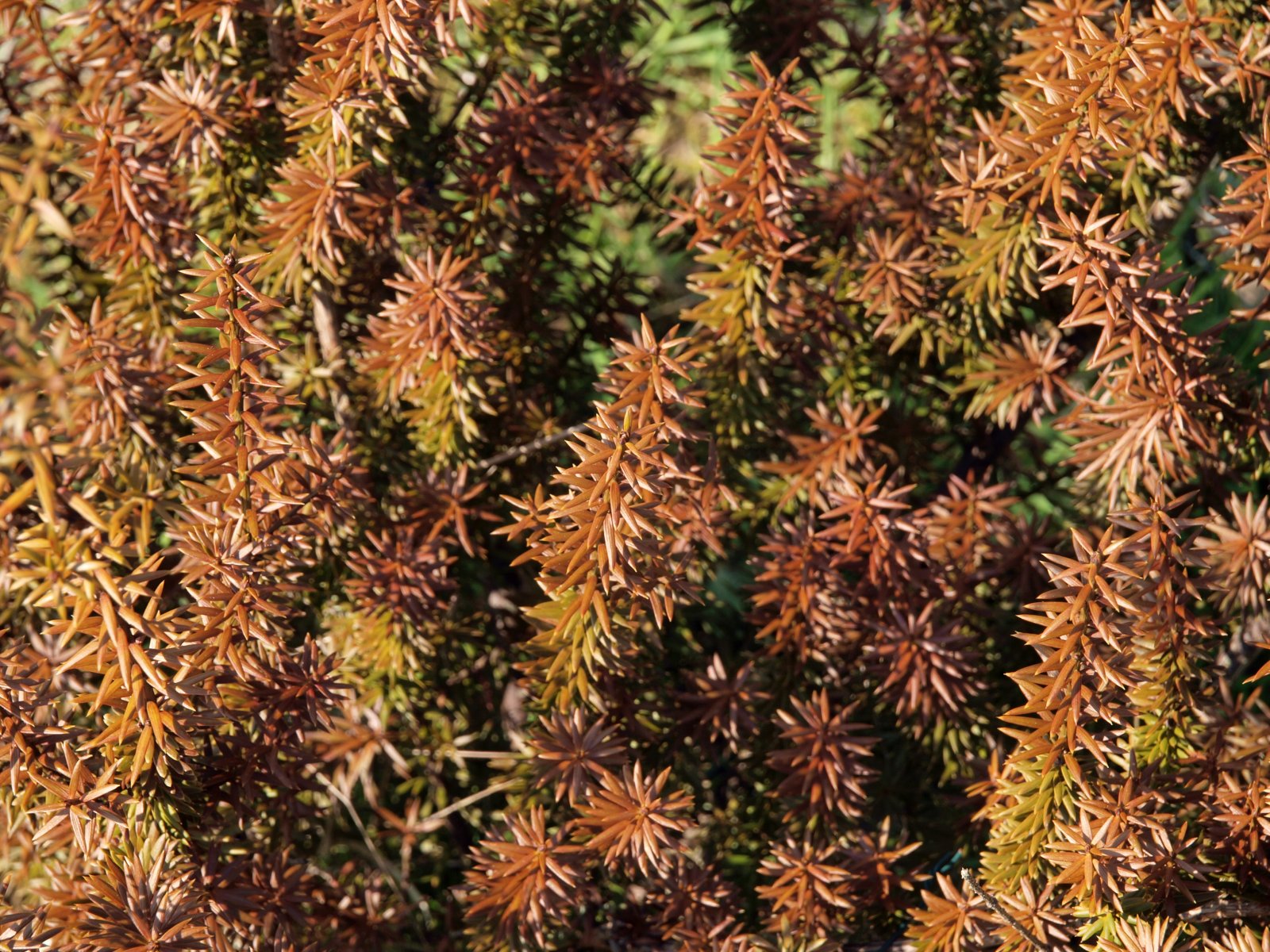 P.totara var hallii (P.hallii or ‘Hall’s totara’)  – This plant grows by the side of the old playhouse and is similar to P.totara but with longer green leaves. It appears to grow more as a shrub than as a small tree.

P.acutifolius – ‘The Sharp Toothed Totara’ – See queries as above. 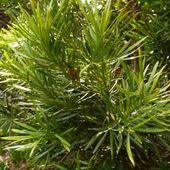 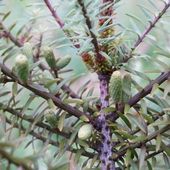 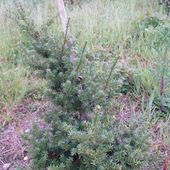 P.nivalis – This is a low, bushy, evergreen, shrub of 4 – 6 feet eventually. It is a native of both New Zealand islands and grows at an altitude of between 1000 and 5000 feet where the plants are more exposed and, consequently, smaller and lower growing. As such it is totally hardy and one of the parents used in the hybridisation of many of the new plants available from nurseries today.

P.lawrencei – ‘Mountain Plum Pine’ – Often incorrectly called P.alpinus, this low growing species is found growing in rocks in the mountains of Tasmania, Victoria and New South Wales.
No male forms are known in cultivation but there are two distinct female forms. One has green leaves and the other blue green leaves. Both have bright red fruits and the resulting crosses with P.nivalis and P.acutifoluis have proved very colourful.

P.lawrencei ‘Blue Gem’ – cream young foliage tinged with purple which becomes bluish-green later. This is a fine garden plant with spreading branches which droop at the tips. A dwarfish plant but likely to grow rather larger in Cornwall. 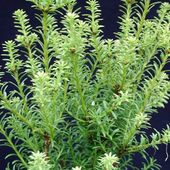 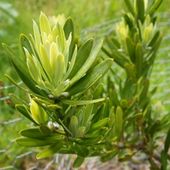 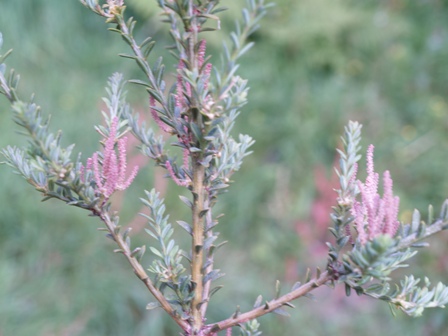 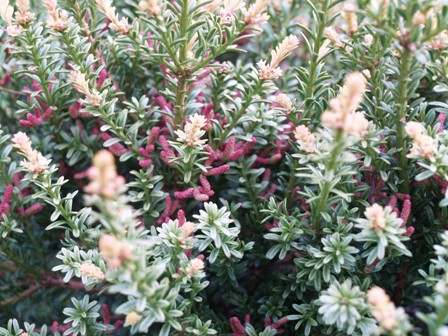 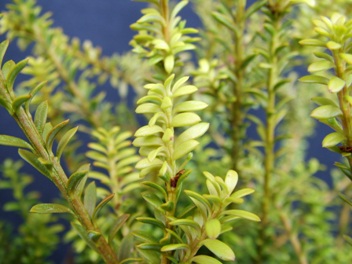