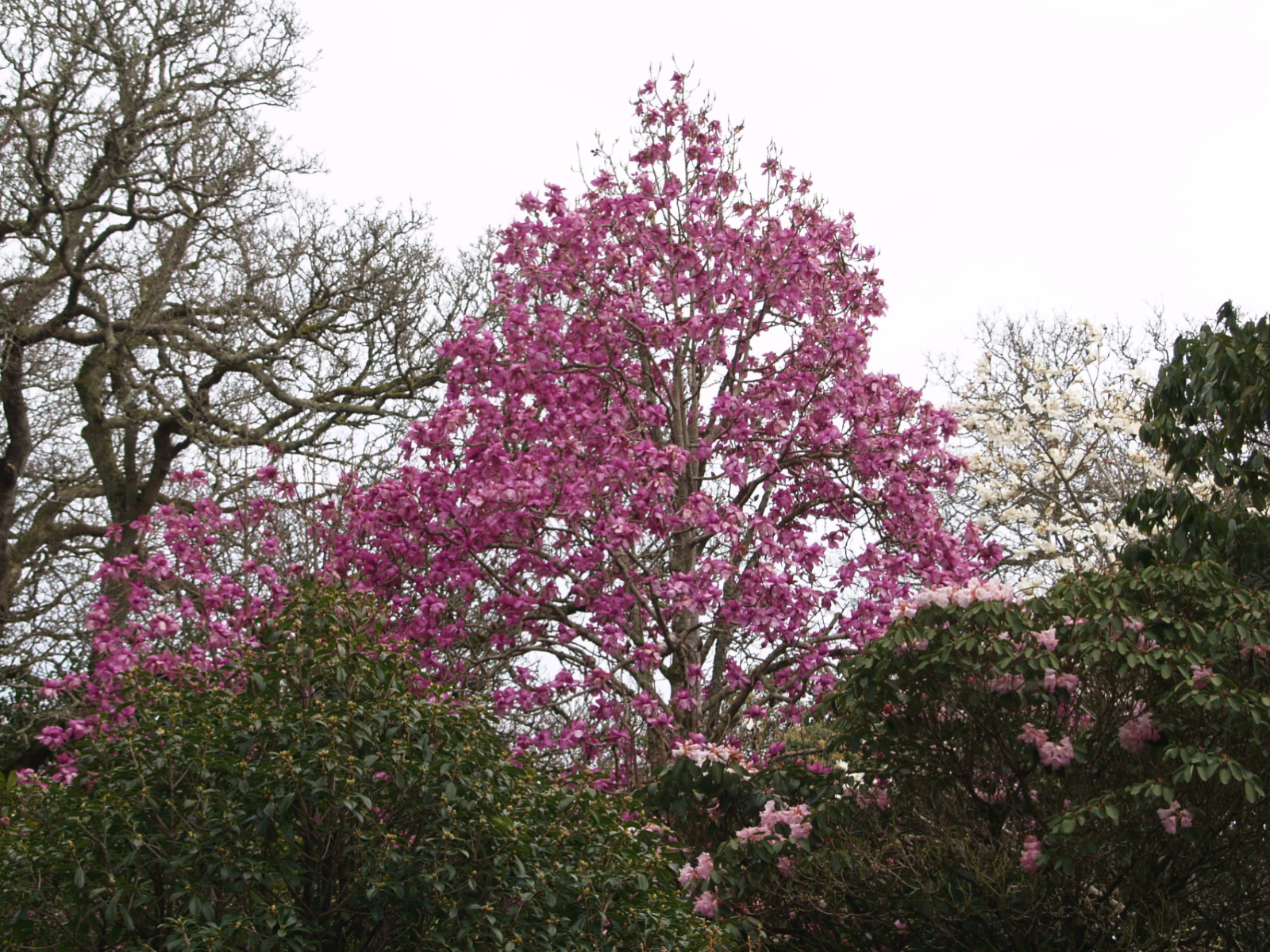 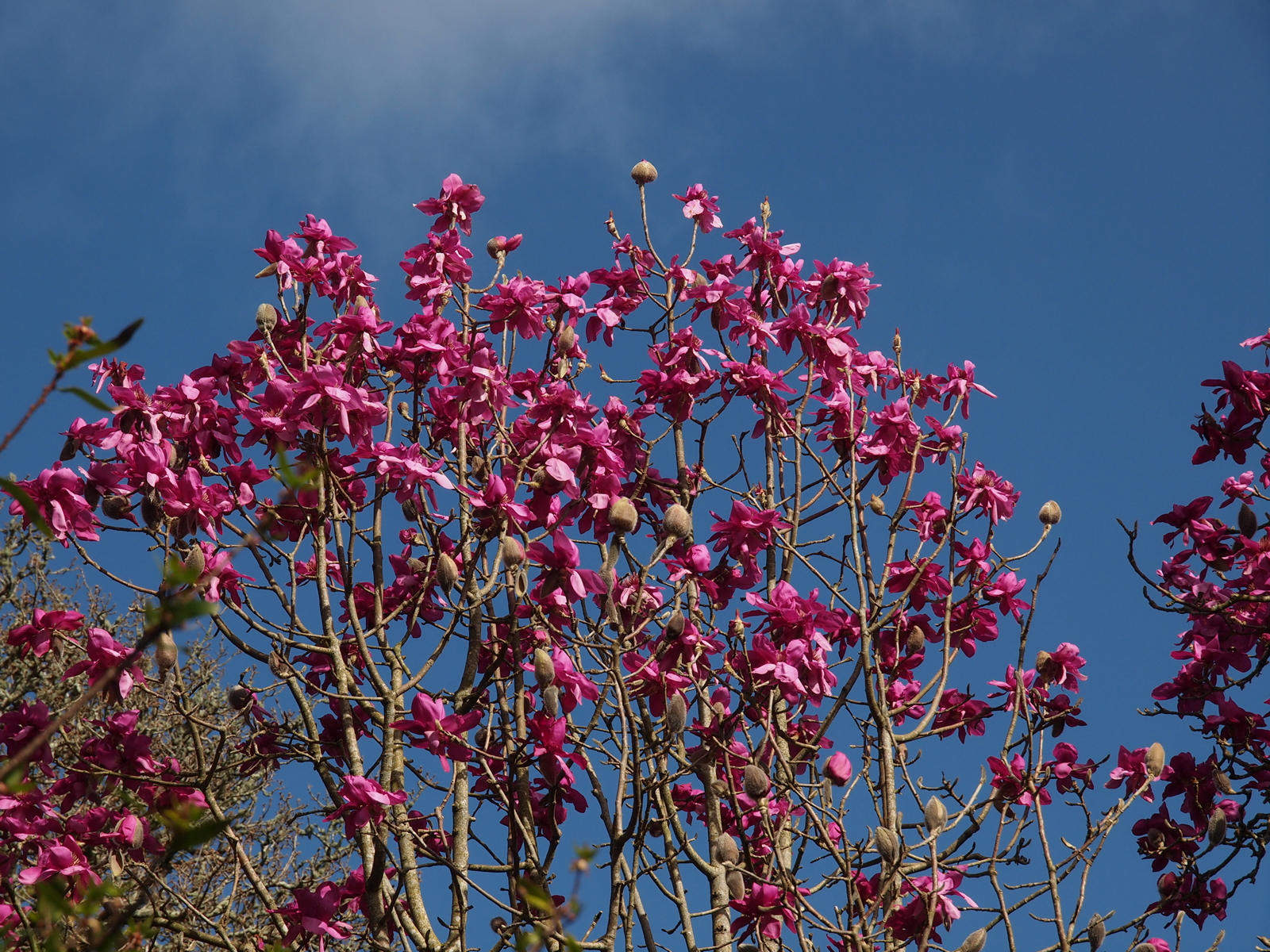 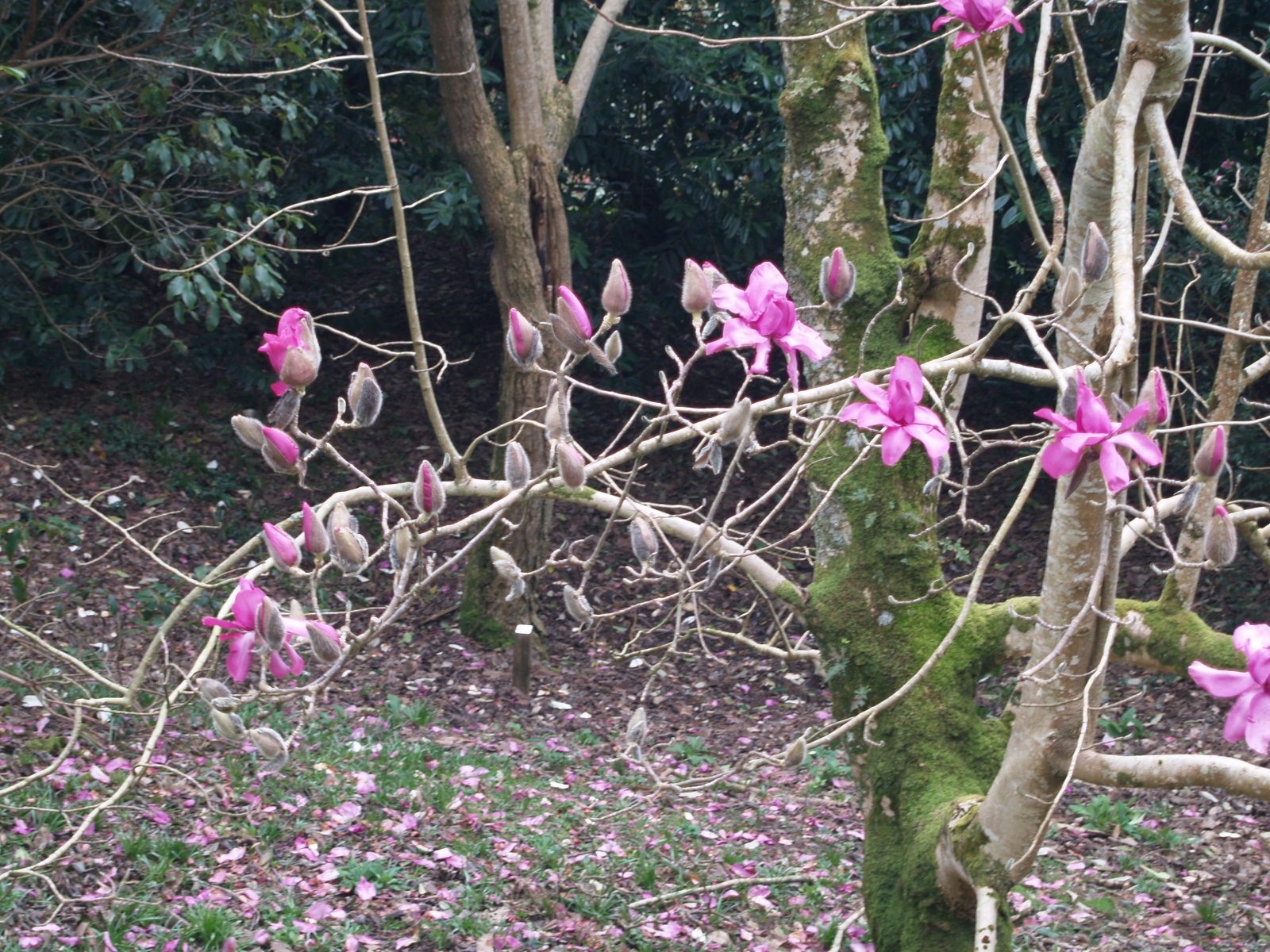 This ‘Lanarth’ seedling was named by my father after Bishop Michael Leonard, Bishop of Truro [see attached printout], following his visit to Caerhays. The plant is currently 35 feet tall and grows in a former quarry. The growth pattern and arrangement of the branches is very similar, although larger overall, to the original Cornish ‘Lanarths’. It flowers mid season, in mid to late March, about a week or so before the New Zealand and original Cornish forms of Lanarth. The flowers are much larger than Lanarth and darker with a hint of dark red in the dark purple tepals especially as they first open. A superb seedling which has inexplicably not been registered until now. (RHS Colour Chart: Red Purple Group N74 Vivid Reddish Purple A fading to B) 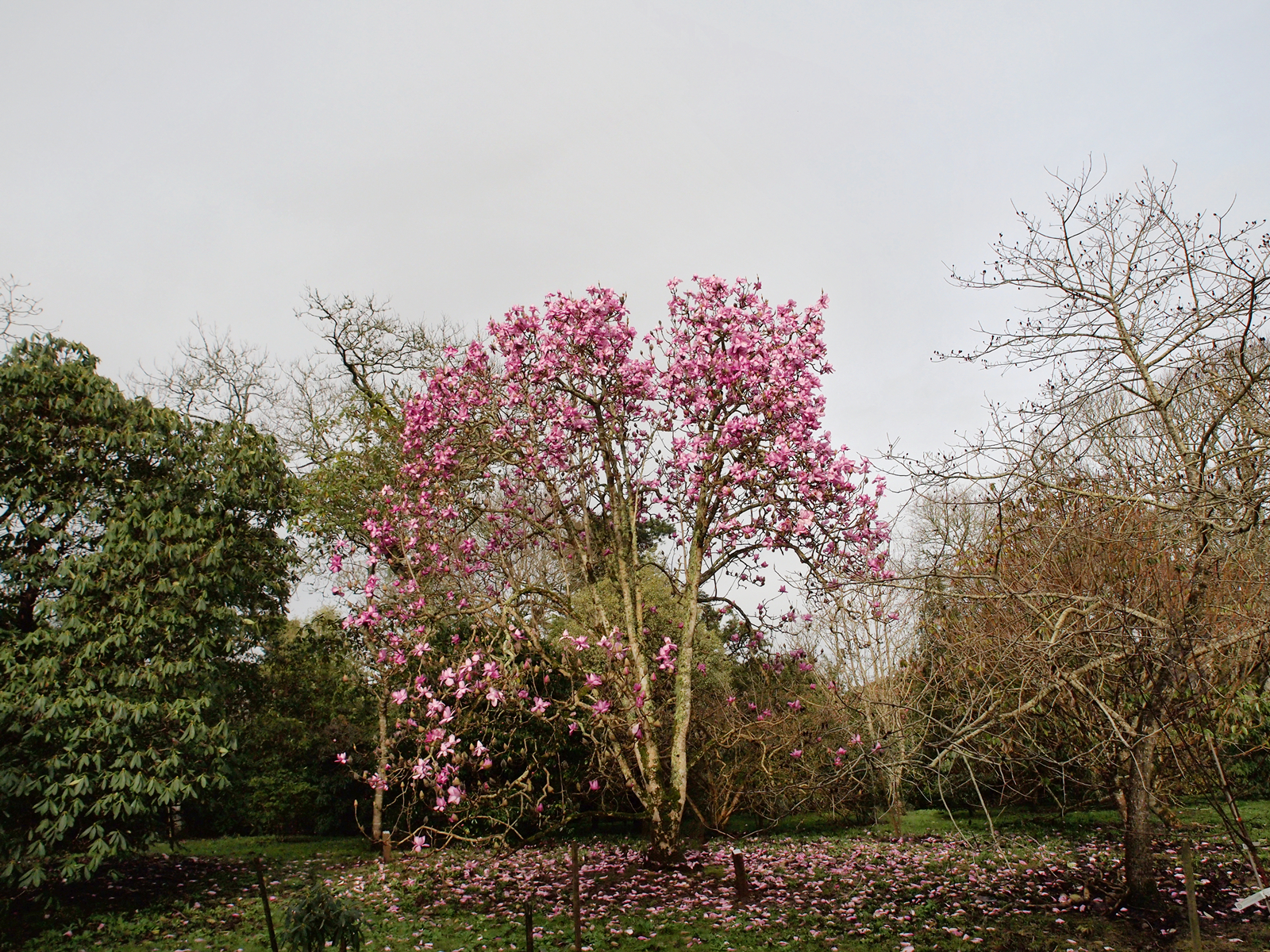 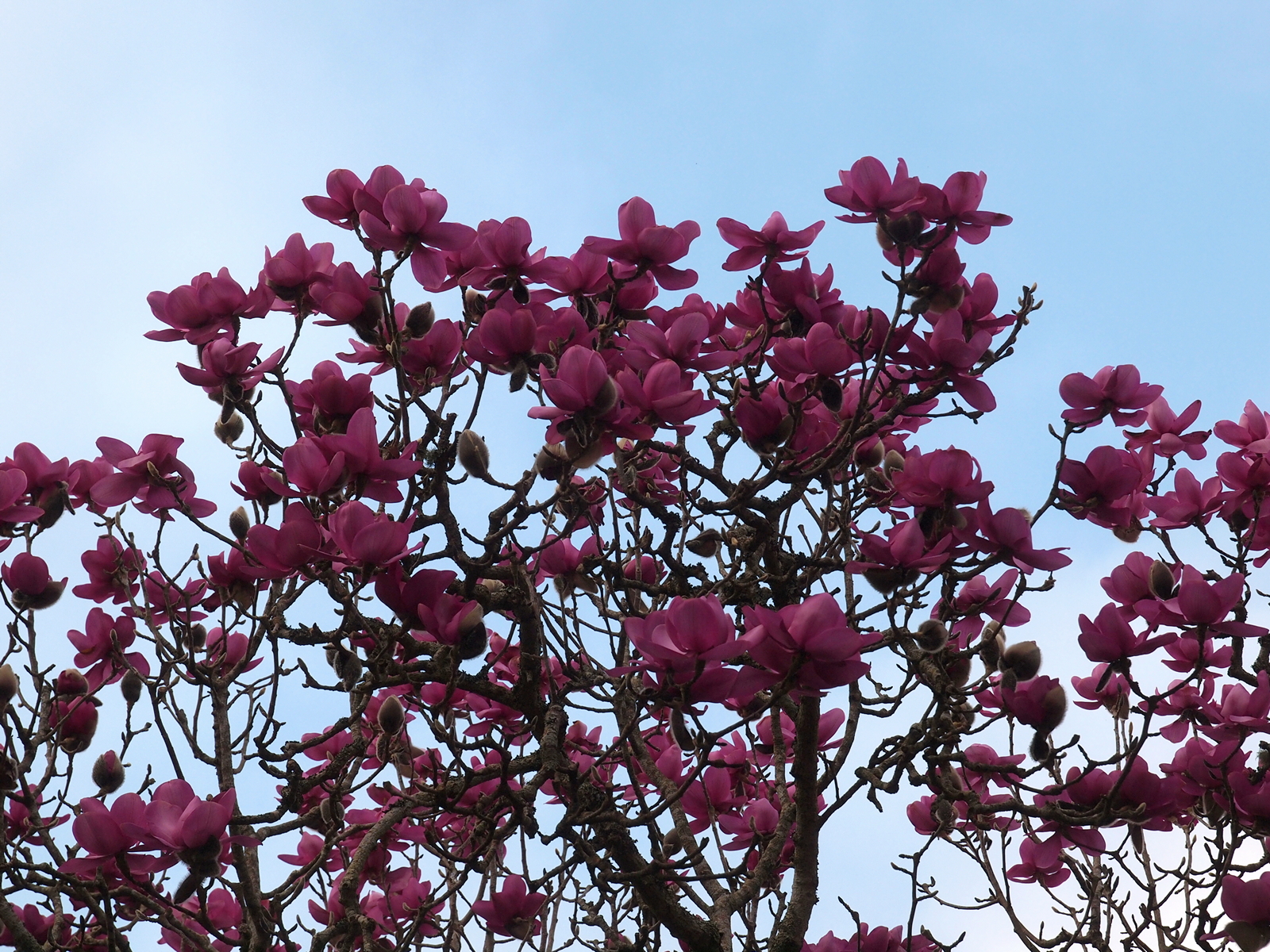 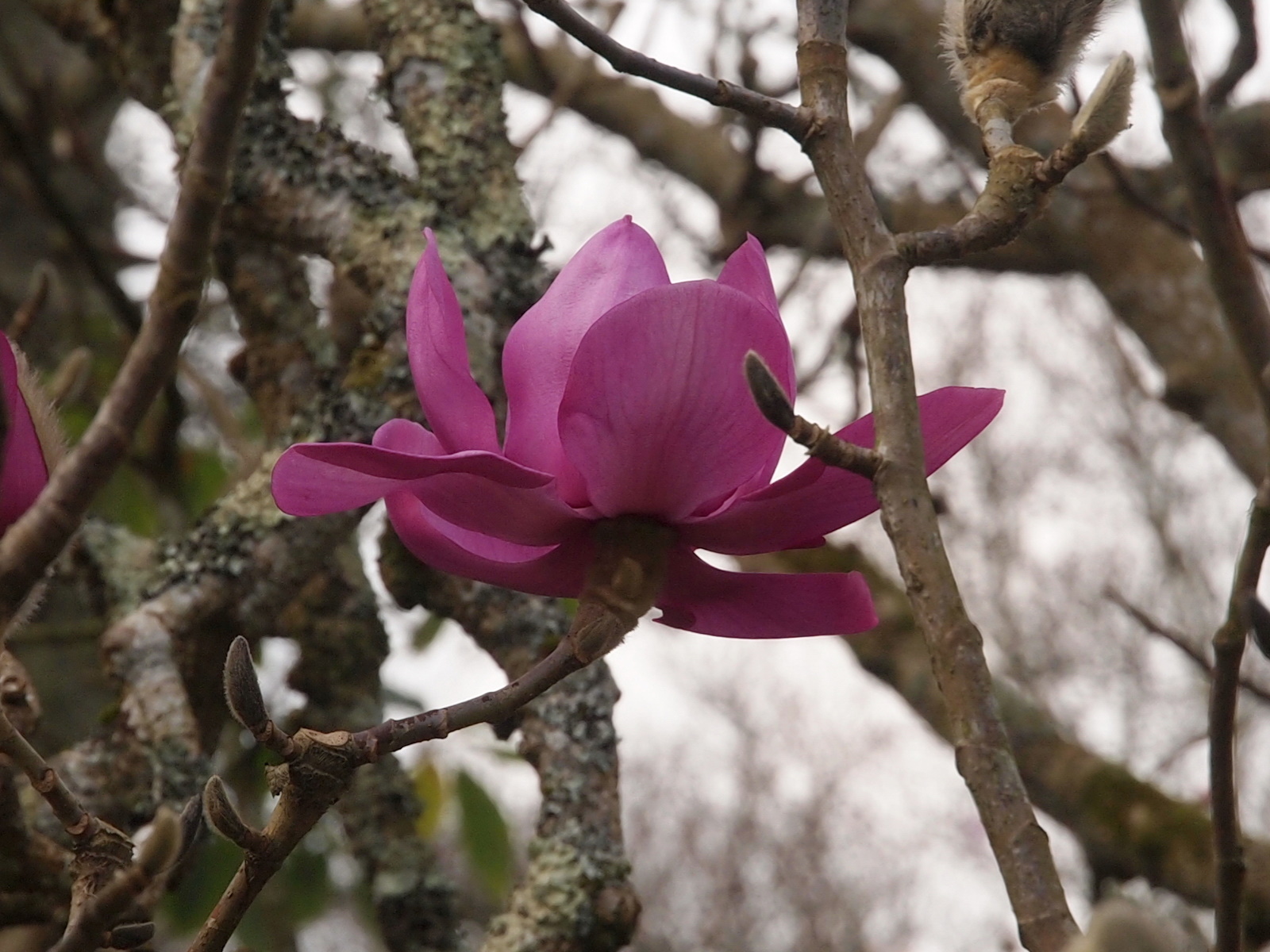 This seedling was named by my father after Bishop Peter Mumford, Bishop of Truro (1981 to 1989), after his visit to the garden. This magnolia is nearly always the first magnolia in the garden to show colour and flower; usually in mid to late February. After around 60 years the plant remains only 20 feet tall and its shape and habit closely resembles that of the original true M ‘Lanarths’ in Cornwall. Its colour is however much paler than ‘Lanarth’. There has been a long association between magnolias and bishops of Truro. Bishop Hunkin, bishop of Truro 1935 to 1950, wrote my great grandfather’s obituary (J C Williams 1861 to 1939) in the Journal of the RHS in January and February 1943 and was given by Caerhays a Magnolia sprengeri ‘Diva’ seedling which was subsequently named M.sprengeri var ‘Diva’ ‘Copeland Court’ after the location of the bishop’s garden in Kenwyn, Truro. Today ‘Copeland Court’ is widely grown and appreciated in the UK but few know its history. (RHS Colour Chart: Red Purple Group N74 Vivid Reddish Purple B fades to Deep Purplish Pink C) 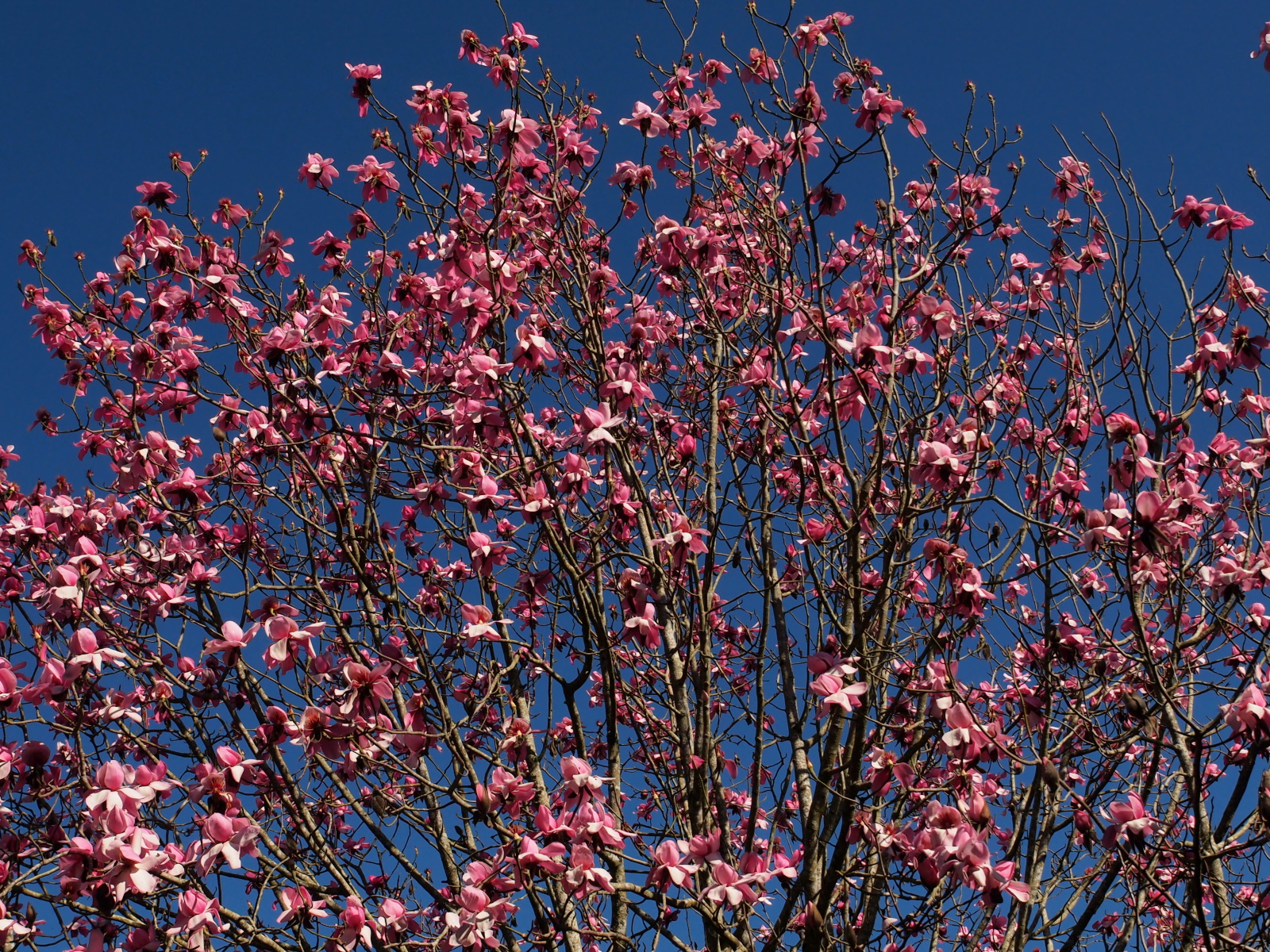 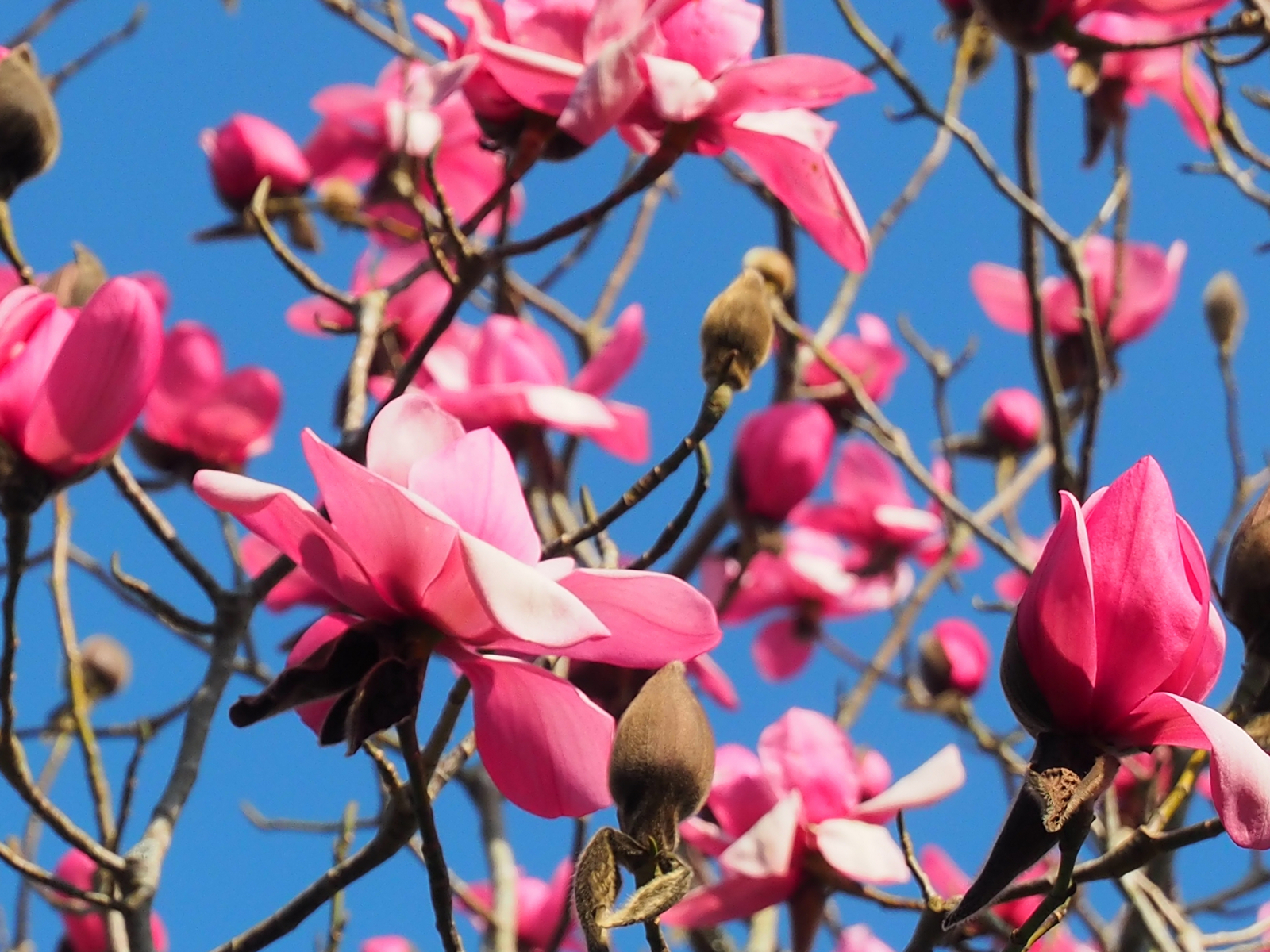 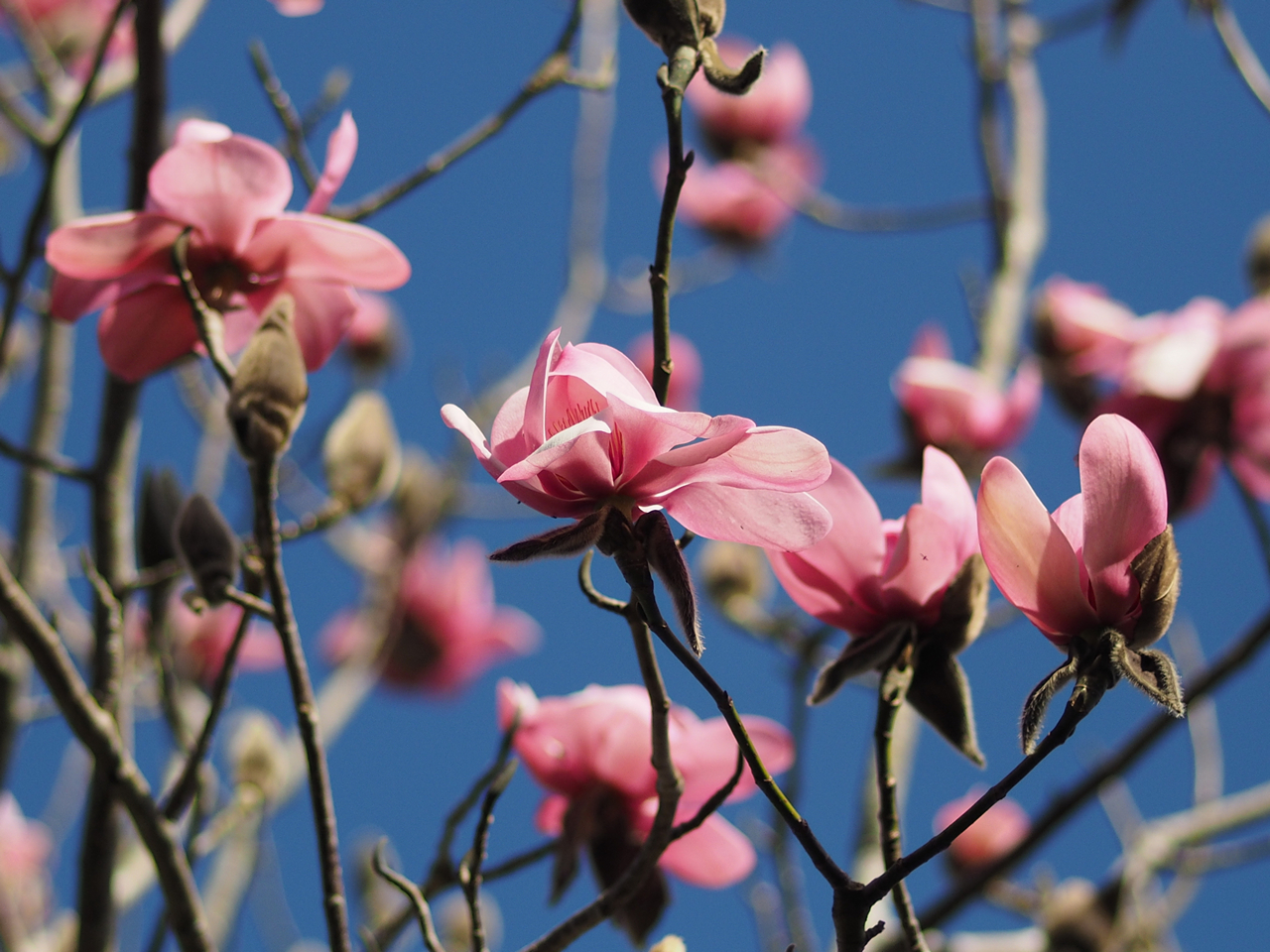 Of all the many later hybrids produced at Caerhays by F J Williams (my father) and Philip Tregunna (head gardener) in the late 1980s and 1990s this is only the third to merit registration alongside ‘J C Williams’ and ‘F J Williams’. The reason for the delay is partly because it took several years to flower profusely and partly because in the aftermath of the January 1990 hurricane it was planted in a devastated area and has taken time to emerge well above its surrounding new plantings. It is a very vigorous plant with a strong leader and is now over 35 feet tall. Against a blue sky its upright dark pink flowers open with paler insides to the tepals to produce a breathtaking effect and one which will hopefully captivate magnolia enthusiasts as much as us at Caerhays. (RHS Colour Chart: Red Purple Group 73 Strong Purplish Pink B) 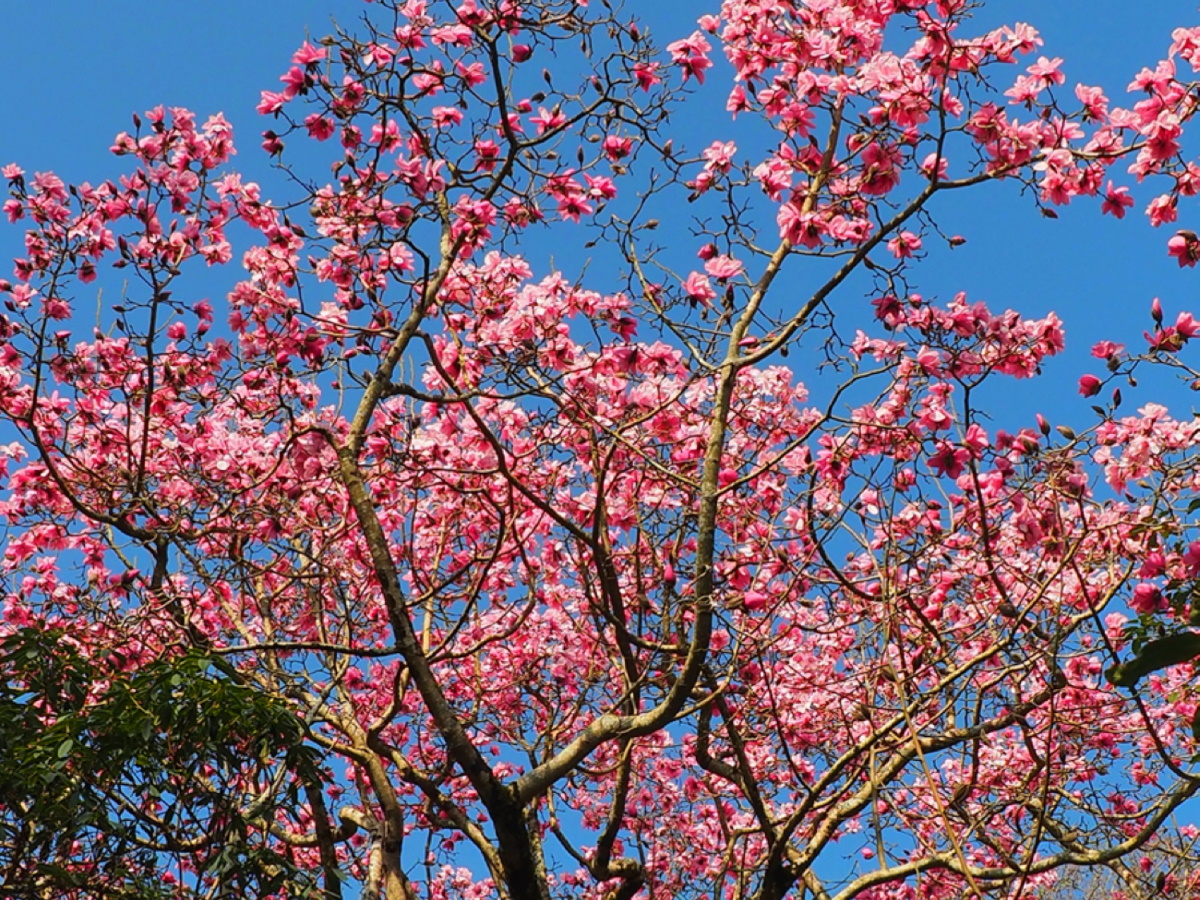 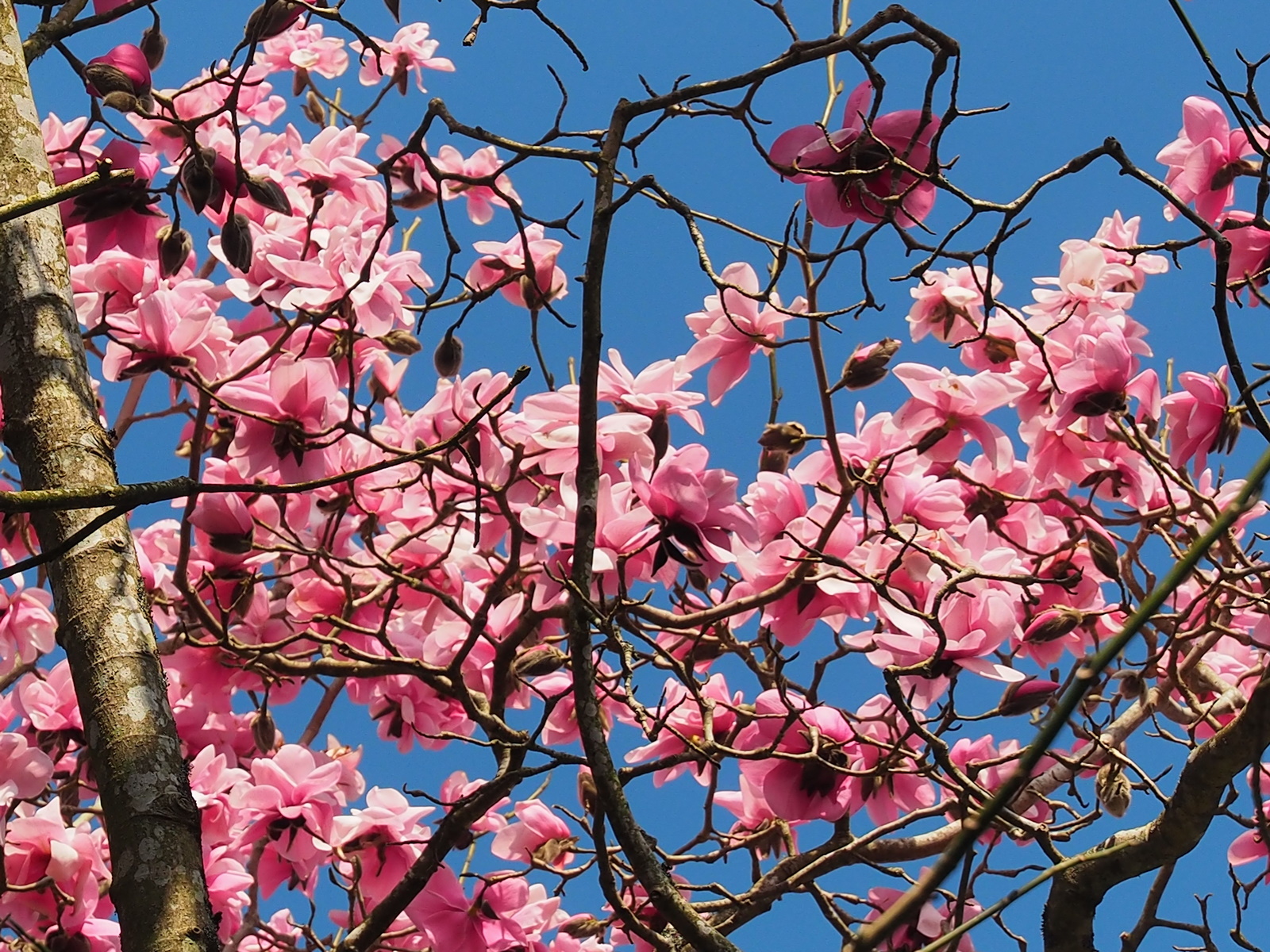 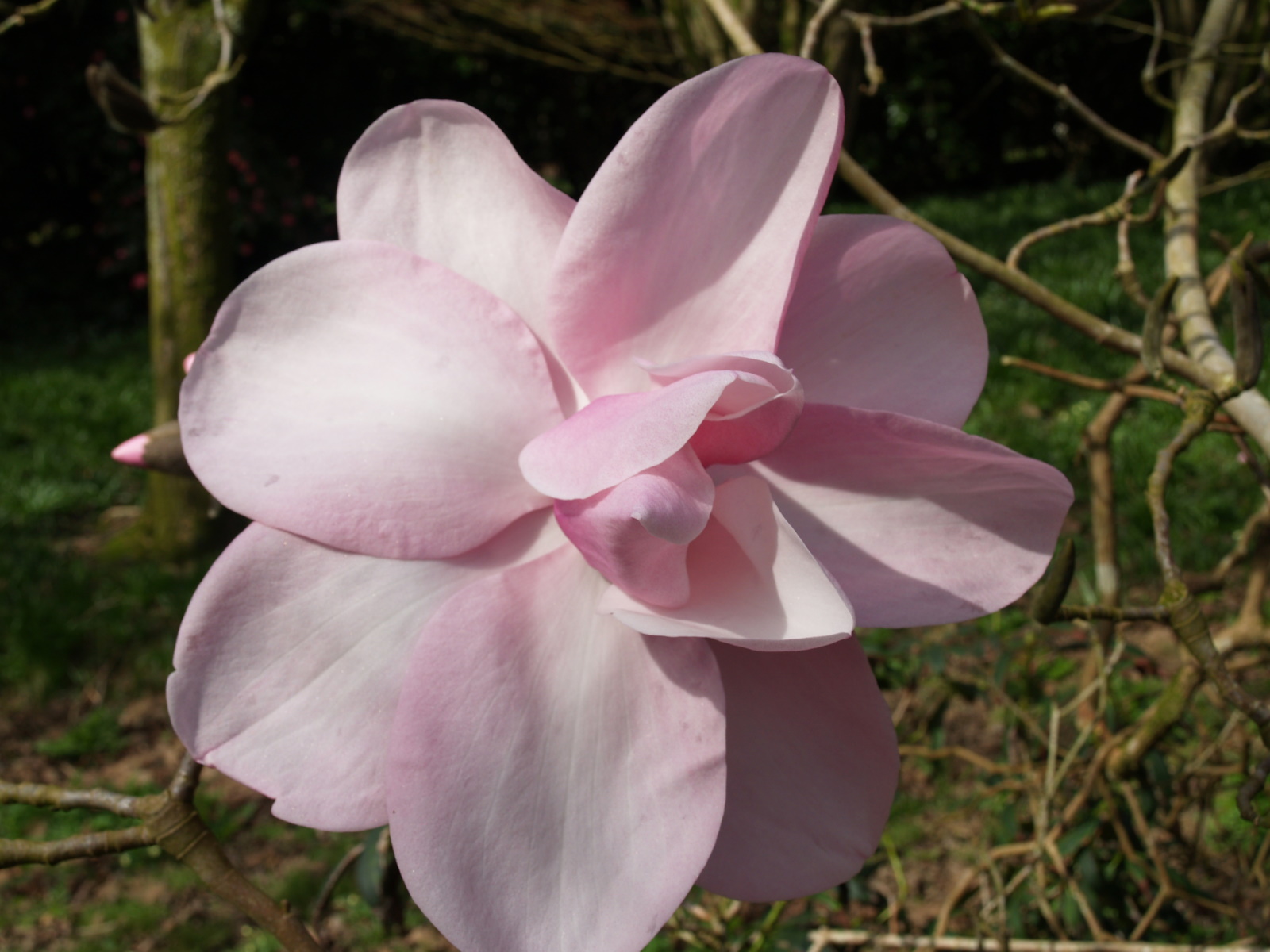 For three and a half decades this exceptionally floriferous magnolia has been admired by visitors but, strangely, no steps had been taken to formally register it until now. By 2006 this Record Tree measure 16 meters in height with a girth of 2.16 meters despite being planted in exceptionally poor and stony soil. The flowers are arguably larger than any other hybrid of the species and, with the exception of M ‘Atlas’, perhaps the largest of any magnolia including M ‘Caerhays Belle’ or M ‘Kews Surprise’. The colour is a rich even pink and the tepals only begin to droop very near the end of the flowering season. Against a blue sky this magnolia is, on its day, perhaps the greatest spectacle of any magnolia in the garden hidden away, as it is, in a glade behind a record sized stand of Acer senkaki planted in 1912. The plant is named after my late mother, Delia Williams, although it has carried this unregistered name for many years. (RHS Colour Chart: Red Purple Group 62 Starts 62A fades to 62C) 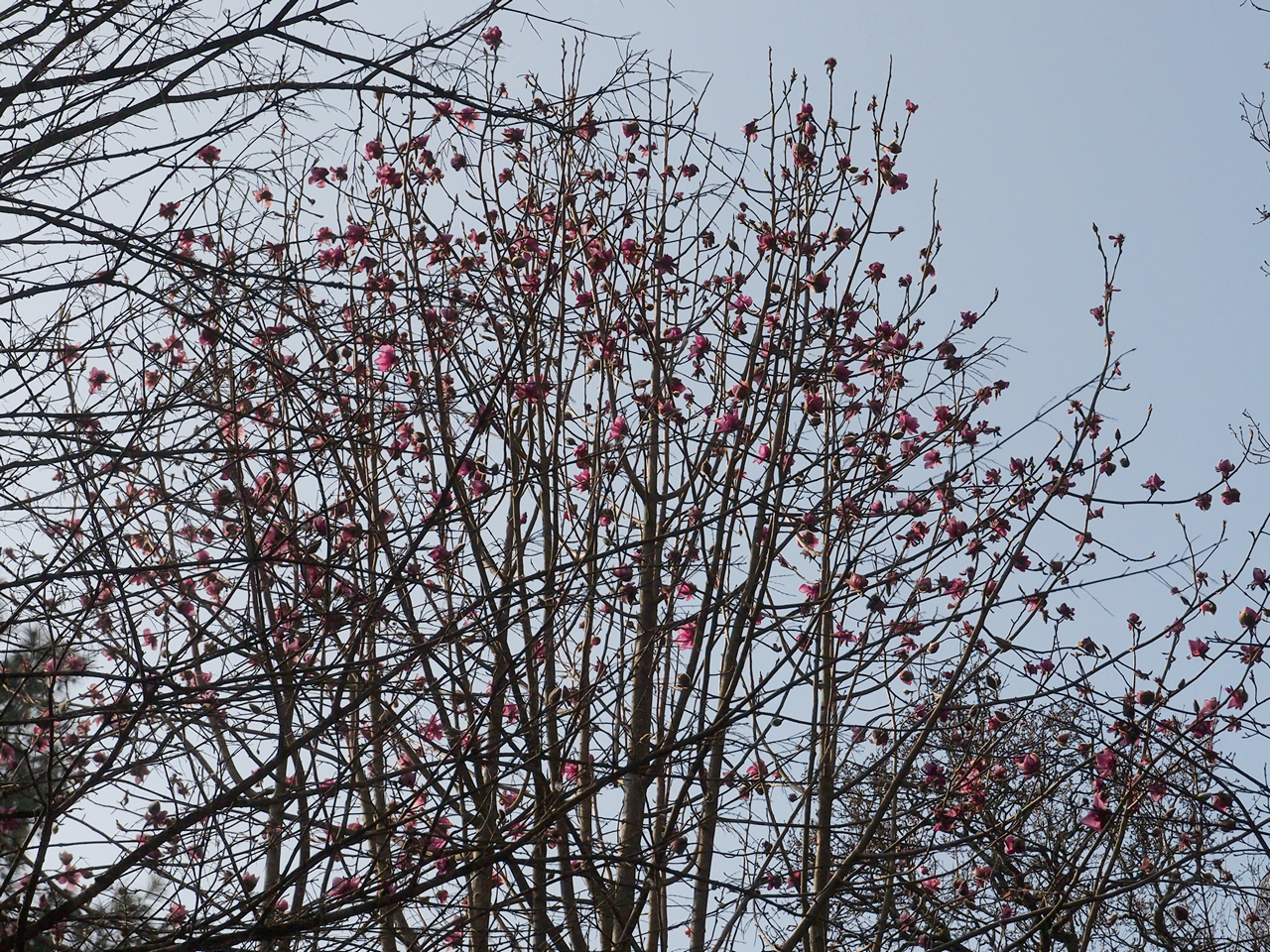 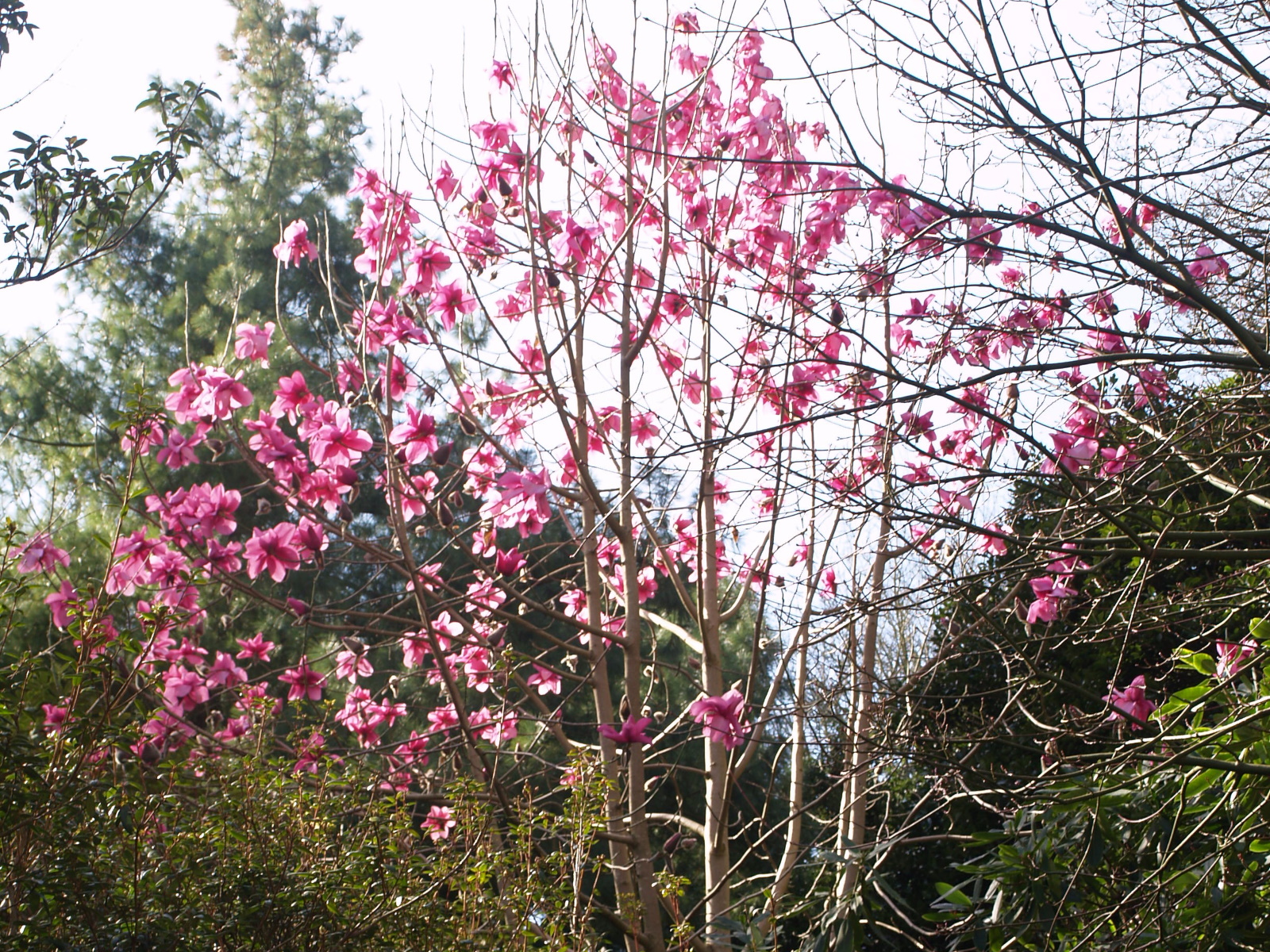 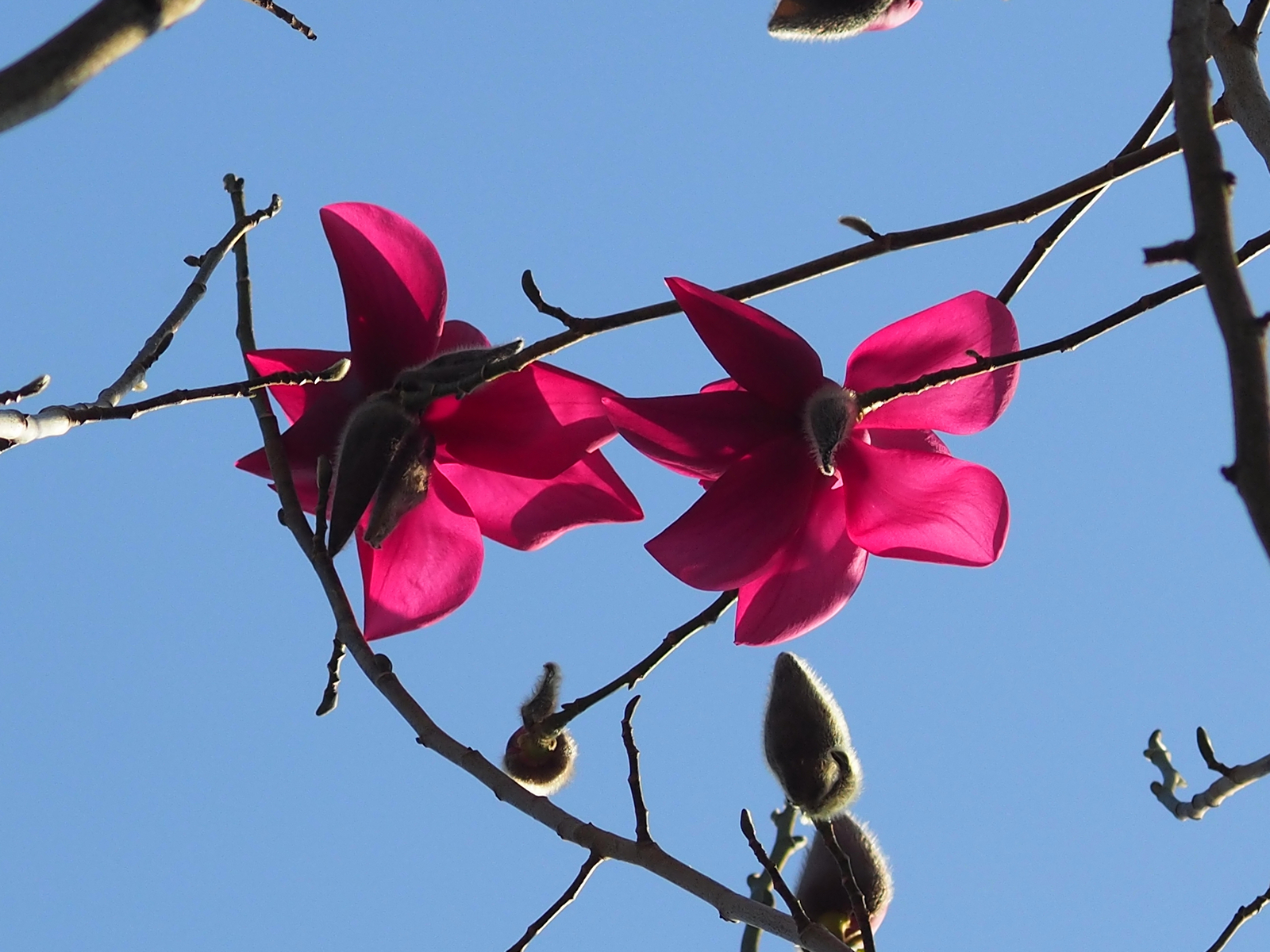 This is a vigorous upright plant already over 20 feet in height. It was raised by Philip Tregunna, head gardener at Caerhays for 40 years, and planted by his successor, Jaimie Parsons. It was a sparse flowerer in the early years but has settled now into an excellent display. The flowers are smallish and ‘Lanarth’ shaped but with a strong hint of red as they first open. We have thought for some years that this seedling was sufficiently different to be worthy of registration but have only just got around to doing so. (RHS Colour Chart: Red Purple Group 67 Vivid Purplish Red B) 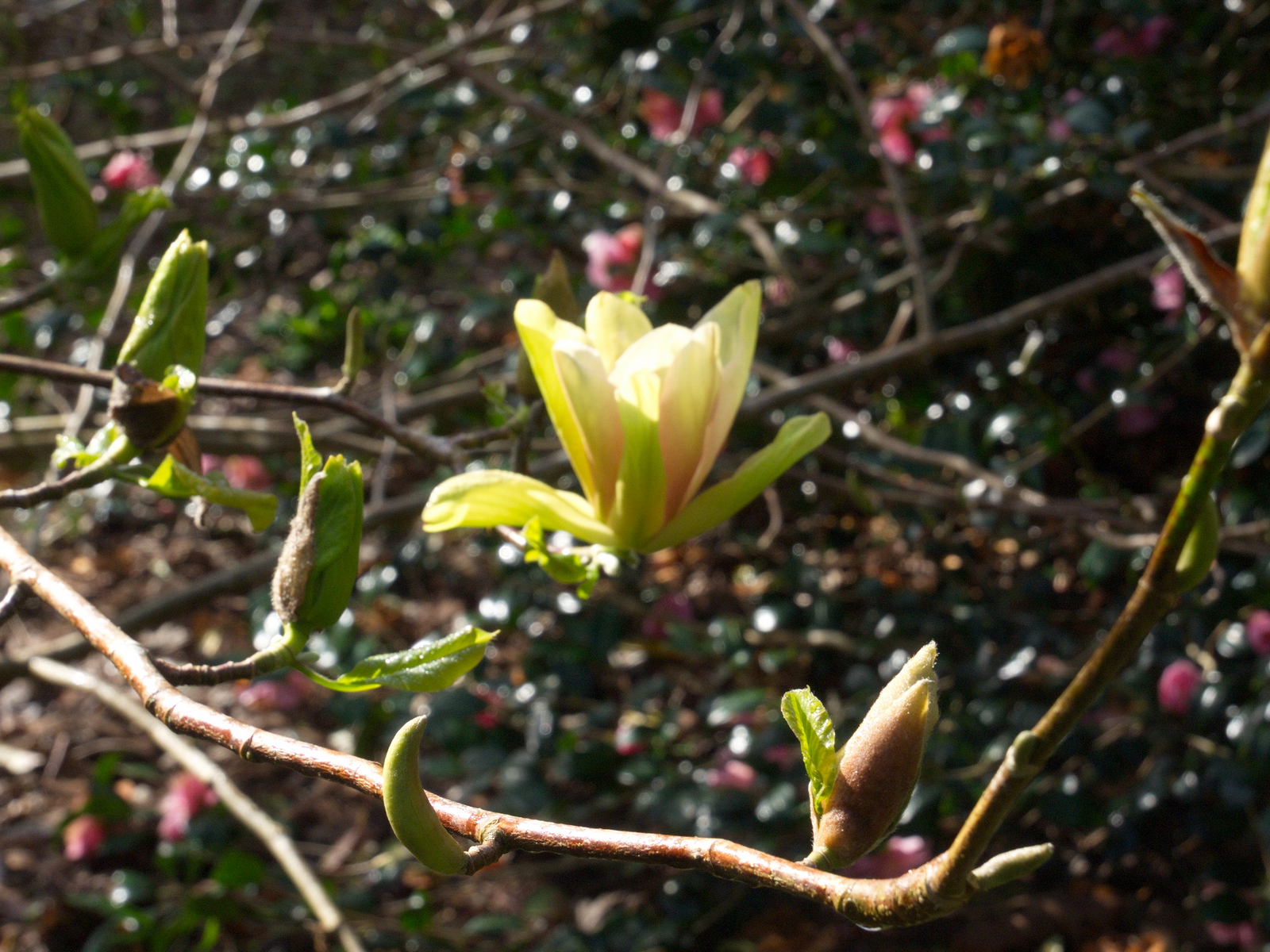 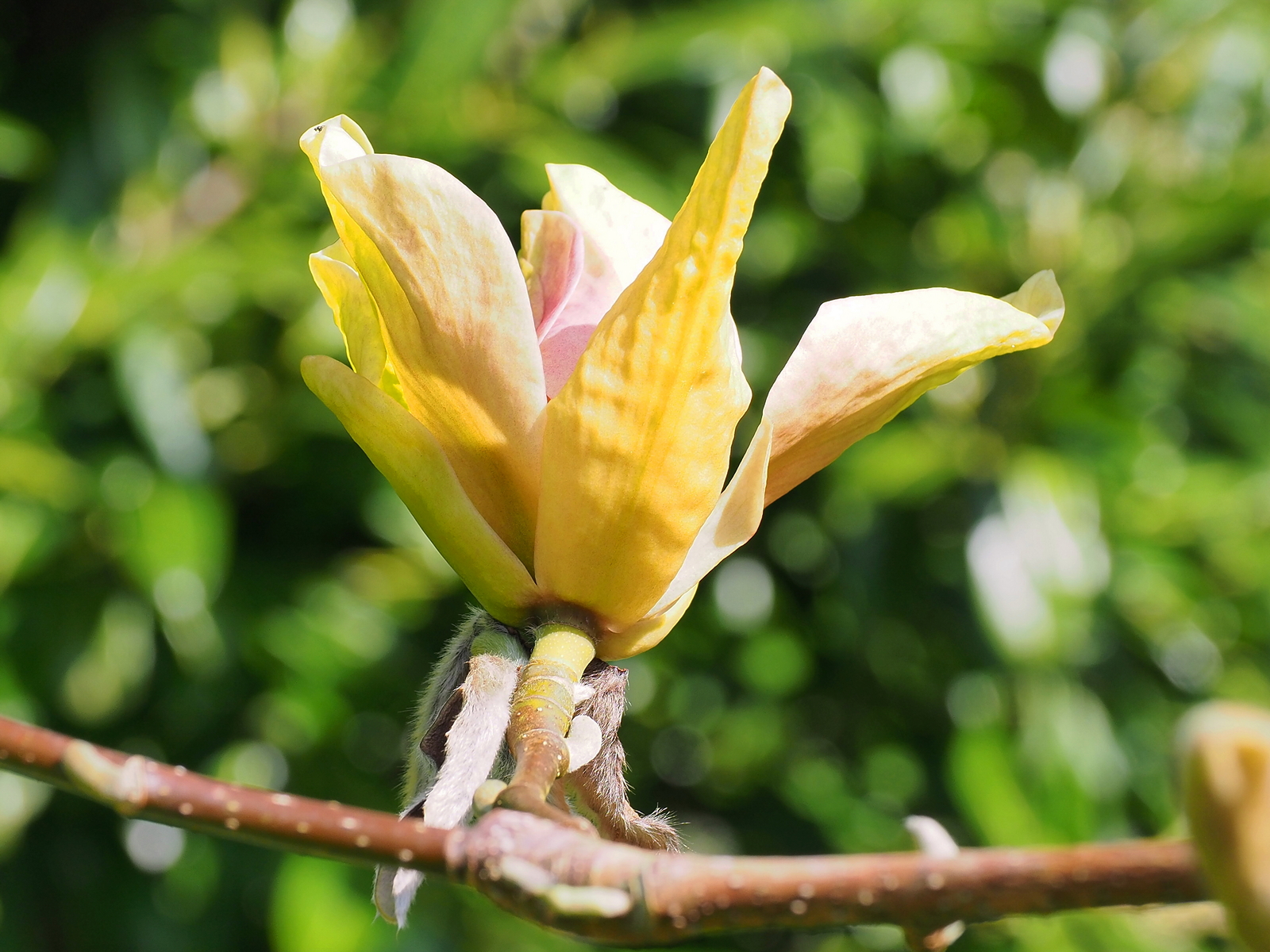 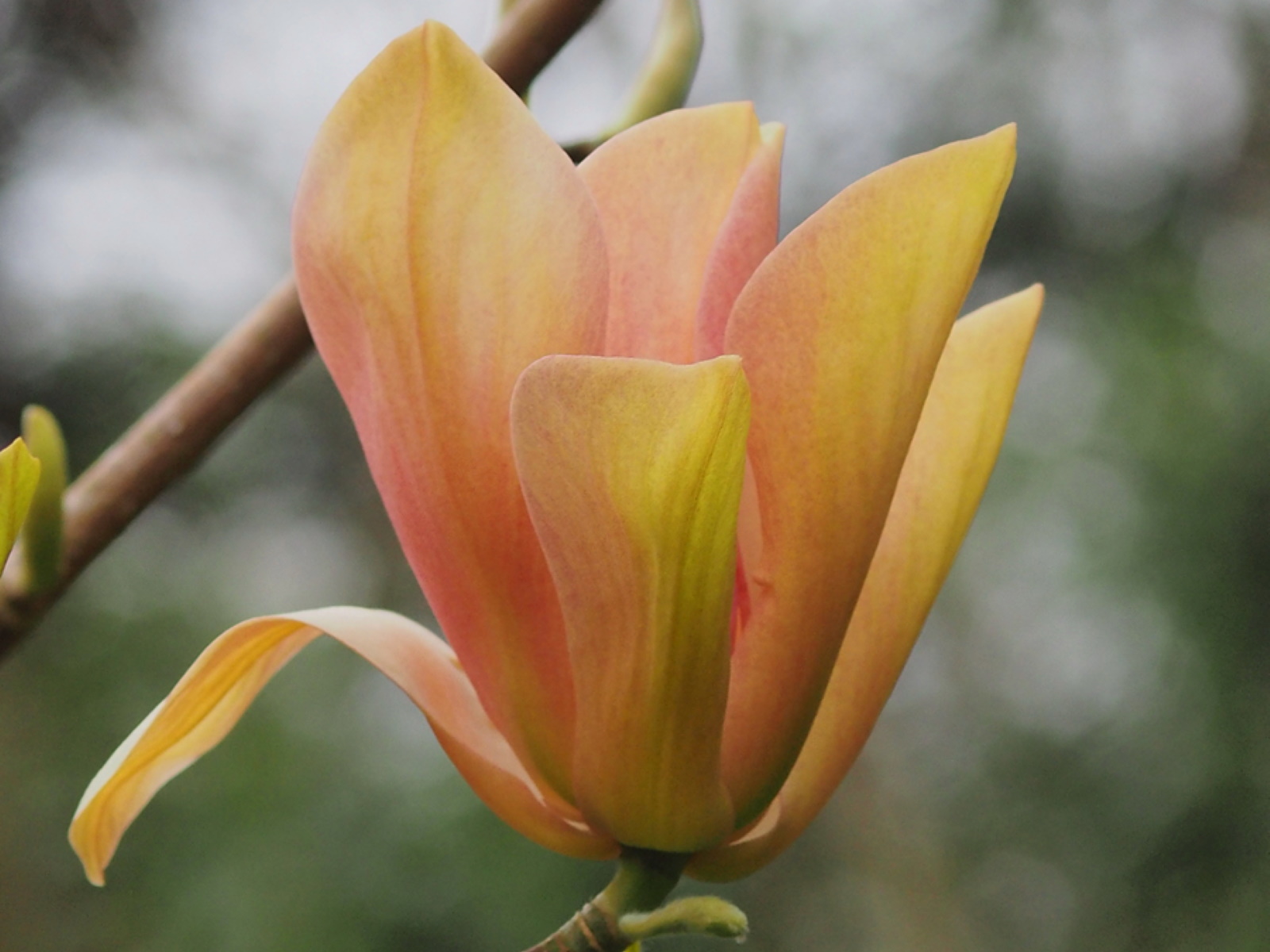 This plant was purchased as an unnamed hybrid from Eisenhut nurseries in Switzerland in 2000/1 and planted out in 2003. It was first seen in flower in late April 2011 but had probably flowered before this. There are two seedlings already registered from this same cross; ‘Peachy’ and ‘Flamingo’. The former also grows at Caerhays and has flowered since 2009. Both are quite different in colour to ‘Tropicana’. The mixture of colours and the changes in the colours of the flower between first opening and falling are easier to describe in photographs than in words. It is nevertheless a most unusual magnolia in flower. A large spray of ‘Tropicana’ (then unnamed) won the best in show magnolia cup at the main RHS Rhododendron, Camellia and Magnolia show at Rosemoor in 2014. The plant has a spreading habit, is around 12-15 feet tall and regularly sets seed. The flowers first show colour in mid to late April and they remain out at least until mid May. Not all the flowers come out at once. The name ‘Tropicana’ resulted from numerous enquiries made to a succession of garden visitors on conducted tours at Caerhays. A Mrs Helen Lindsey came up with the best suggestion for a a true description of the flowers this year. The Magnolia Society International seedlist has in the past offered members seeds from hand pollinated crosses from the same two parents so there may yet be more colour variations to come. 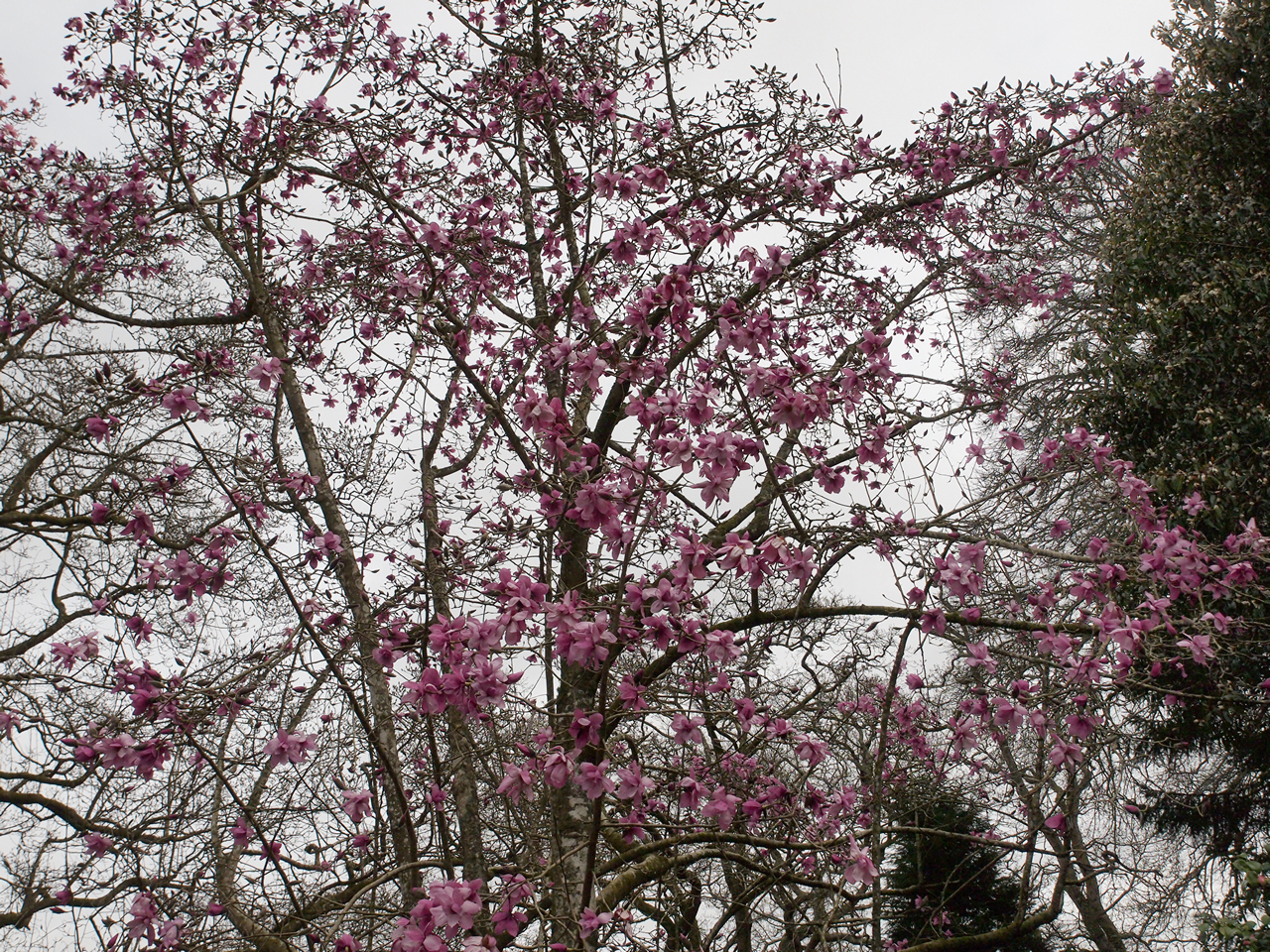 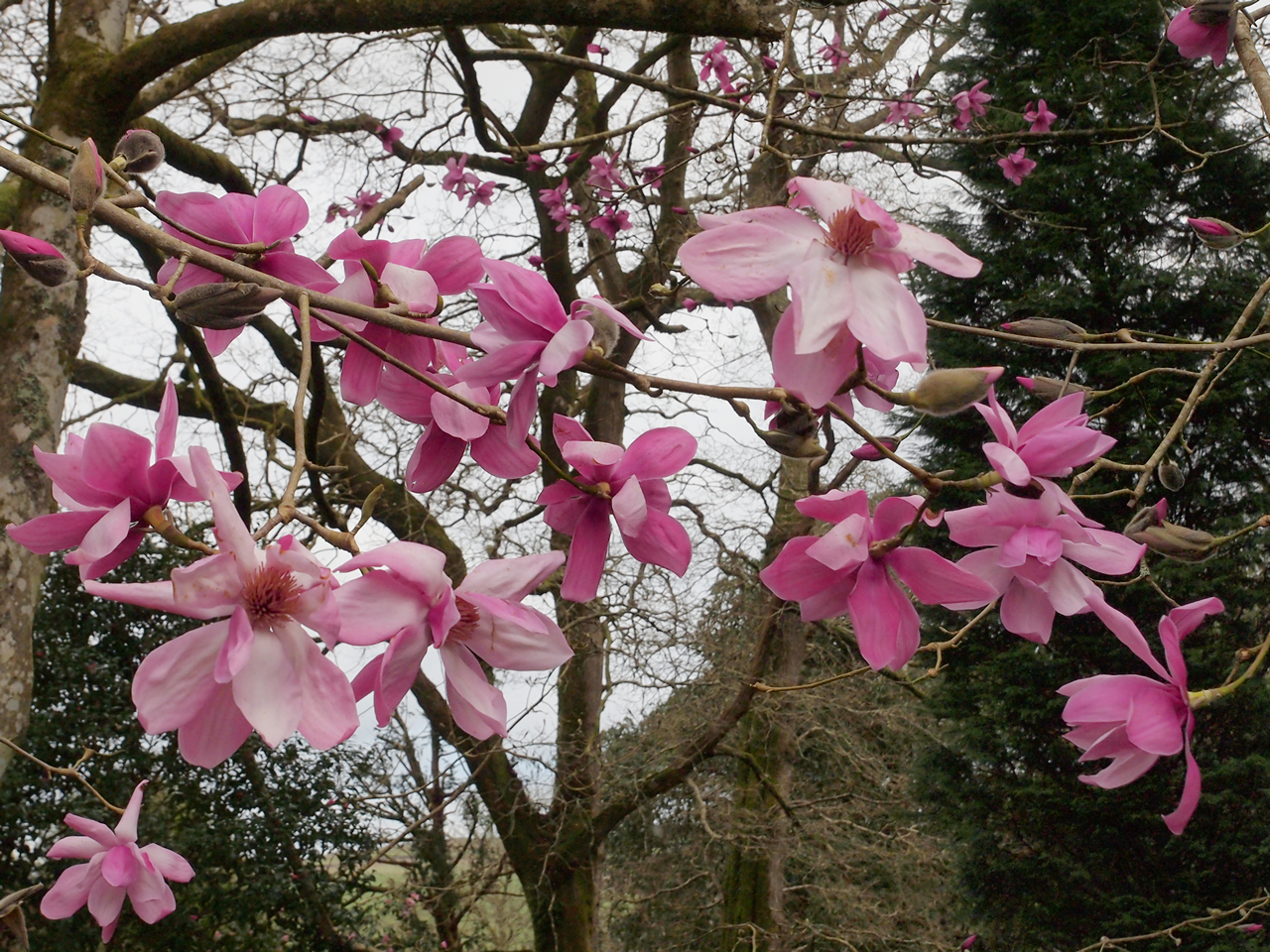 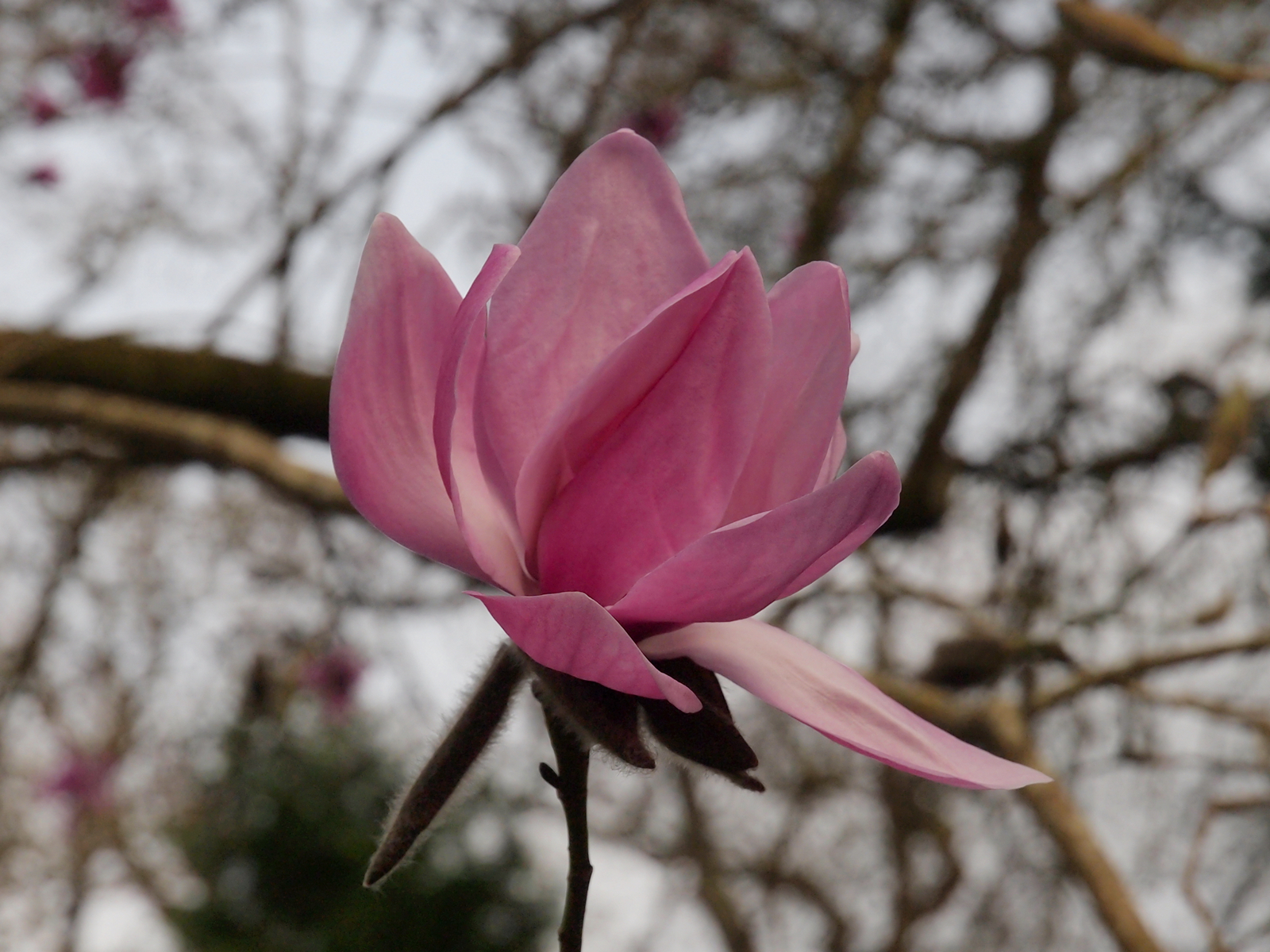 A quick growing plant bred by Charles Michael (head gardener at Caerhays until 1956) which came from the same batch of seedlings as ‘Caerhays Belle’. Over many decades my father insisted that it was not quite good enough to be worthy of registration in his own right and given a name. This has frequently been questioned by other magnolia enthusiasts and, in particular, Jim Gardiner and Roy Lancaster. So we thought it appropriate during a general review of registrations of Caerhays bred hybrids to include this and to name it with my father’s Christian name. Sadly the onset of Alzheimer’s prevents him from either objecting or appreciating the joke/honour in his 89th year. The tree was adjudged to be a Record Tree in the tree register for this cross and measured 16 meters tall with a girth of 2.24 meters in 2006. It is a mid to late season flowerer when the adjacent M campbellii (also a record tree) and M.mollicomata are over. The large erect flowers are reddish purple as they open but fade quickly and droop down, as you would expect from a M.sargentiana robusta hybrid, and fade to purplish pink and light purple. (RHS Colour Chart: In bud – Red Purple Group 70B – Strong Reddish Purple : full out – inside of tepals Red Purple Group 73B – Strong Purplish Pink / outside of tepals Purple Group 75C – Very Light Purple.)