Rhododendron seed collected from the wild in China by the great plant explorers Ernest Wilson and George Forrest first started arriving back at Caerhays from 1905. Forrest’s seventh and last seed hunting expedition which ended with his death in Yunnan Province was in 1932. During that period seed from literally hundreds of new rhododendron species then unknown in Western Europe was carefully propagated and grown on before being planted out, often in large clumps, in Caerhays’ expanding new woodland garden. Over 60 gardeners were employed in this task before the First World War to tend and manage this exciting new collection of rhododendrons and many other shrubs.

By 1910 J C Williams, owner of Caerhays, who was by then a major sponsor of Forrest’s expeditions was starting two decades of cross pollination work using these new rhododendron species to produce new named hybrids many of which are still widely grown today in British gardens. This hybridisation work has continued to the present day at Caerhays by J C Williams’ successors.

By the mid-1960s many of the original wild collected rhododendron species were mature and in their prime. Since then Caerhays has discovered that the life span of a taller growing rhododendron species is a maximum of 60-80 years with many smaller growing species dying of old age in a much shorter timescale. Some species could readily be kept going into the next generations by propagating cuttings; a few others responded well to being cut back hard to encourage rejuvenation, but the majority of the larger growing and large leafed species cannot be propagated by cuttings and die if cut back.

Re-growing fresh seed from old original plants might have seemed the answer to these growing specie losses at Caerhays. However, because of the close proximity of so many other rhododendrons, the seedlings were often nowhere near true to type when grown on to flowering size some 5-15 years later.

The solution to the decline in the number of specie rhododendrons growing in the garden was to revert to China to try to obtain wild collected seed of those species which had progressively died out. In the last 20 years very few British plant collectors have been able to obtain licenses to collect seed in the wild in China.

In 1999 Caerhays started making financial contributions to Alan Clark’s regular field trips to Yunnan, Sichuan, North Vietnam and North India in return for a selection of his wild collected rhododendron seed. Many of the species found were new to cultivation while others had formerly grown at Caerhays. There were inevitably many failures with propagating and growing on this seed as well as some successes.

However something more radical was necessary to maintain the Caerhays collection. In 2012 and 2013 Alan Clark was obliged to move the location of his nursery in Cumbria and had many surplus plants for sale from seed material collected from his expeditions.

A careful selection was made to reintroduce those specific species of rhododendrons which were known to have died out from old age since the 1960s. By 2013 two van-loads of young rhododendron species (three of most species) had arrived at Caerhays. There was then much debate about their provenance, the altitude and location at which the seed had been collected and their consequent hardiness and suitability for different areas of the garden. 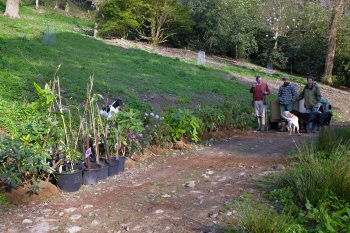 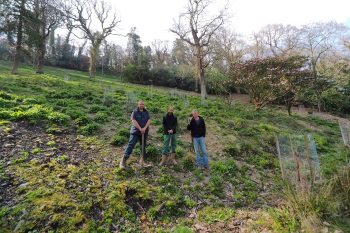 The plants were however still only five or six years old and still far too small to be planted directly out into the garden. Instead they had to be grown on and nurtured in nursery beds in the garden.

The spring of 2015 will see this huge new collection of around 60 wild collected rhododendron species transplanted into the 25 acre garden in Old Park Wood. The woodland garden in Old Park has been extensively cleared in the previous two summers prior to being opened up to the public as part of the overall woodland gardens at Caerhays.  It had been largely neglected for 50 years but plenty of camellias, magnolias and rhododendrons have still survived as a backdrop. The new rhododendron species will be located in a prime position in the centre of the wood with dappled shade where the soil is richest and where wind damage is least likely.

In this way, barring climatic disasters, the rhododendron species collection will have been restored to its former glory. Jaimie Parsons, head gardener, commented that the excitement of growing on these species for his team has matched the excitement of gardeners at Caerhays over 100 years ago seeing these new plants from China grow and flower for the first time.